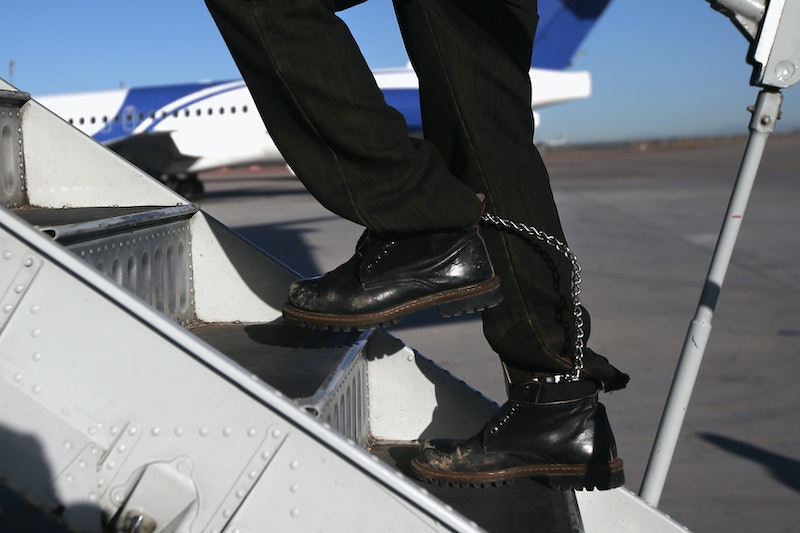 A man who fought for the United States twice-over has been formally removed from the country where he has lived most of his life. Last Friday, 39 year-old U.S. veteran Miguel Perez was deported to Mexico after being denied citizenship, purportedly because of a prior drug felony, CNN reported.

According to multiple reports, Perez came to the United States legally when he was only 8 years old, and signed up to join the army in 2001, right before 9/11. He served two tours in Afghanistan during his service, and developed post-traumatic stress disorder, commonly referred to as PTSD, reportedly because of his service.

Now, over 15 years later, he was kicked out of the only country he has called home since adolescence. The reason reportedly traces back to 2010, when Perez was convicted for delivering over 2 pounds of cocaine to an undercover police officer. The event in question took place in 2008. By 2012, The New York Times reported, Perez entered removal proceedings — the administrative procedure to determine someone's eligibility for deportation.

He has reportedly been in U.S. Immigration and Customs Enforcement (ICE) custody since 2016. Because of his conviction, he was deemed ineligible for citizenship, even though he applied retroactively.

As of Monday, CNN reported, Perez told the press he was in Tijuana, Mexico. He has said that he fears for his life. One particular concern, his lawyer told the Times, is that cartels might try to recruit Perez because of his military experience, and could kill him if he refuses to join. In fact, he told CNN he even went on a hunger strike because of it.

Both of Perez's parents and one of his sisters are reportedly naturalized citizens. A second sister is a citizen by birth.

At least one high profile politician has taken up his cause. Sen. Tammy Duckworth wrote a letter to Homeland Security Secretary Kirstjen Nielsen, asking that she intervene in Perez's case.

"Mr. Perez Montes served as a Paratrooper and Private First Class until his discharge in 2004," Sen. Duckworth wrote. "While serving in Afghanistan from 2002 to 2003, he began suffering from severe post-traumatic stress disorder."

Sen. Duckworth said that Perez was not diagnosed with service-related PTSD until Feb. 2011, seven years after he was discharged from the military "Without proper VA care, he self-medicated with drugs and alcohol to cope with his PTSD, which eventually resulted in his drug conviction," Sen. Duckworth said.

The senator is also an Army veteran, and told Sec. Nielsen that she found "the Trump Administration's pattern of deporting military veterans deeply troubling." She also described the move as "a shocking betrayal of someone who served his country with valor during wartime."

After news of Perez's deportation, Sen. Duckworth eviscerated ICE and Sec. Nielsen in a statement:

This case is a tragic example of what can happen when national immigration policies are based more in hate than on logic and ICE doesn't feel accountable to anyone. At the very least, Miguel should have been able to exhaust all of his legal options before being rushed out of the country under a shroud of secrecy. I am appalled that Secretary Nielsen did not respond to my personal appeal merely asking that she review Miguel's case and decide for herself whether deporting this brave combat veteran was a good use of DHS' limited resources.

Whether or not Perez has reasonable hope for an appeal is unclear. However, he told The Chicago Tribune that his military training taught him to persevere, no matter what. "I’m not leaving. They’re taking me,” he told the Chicago paper. "They’re not going to teach me to never give up, and then I give up,” he added, referring to his military training.