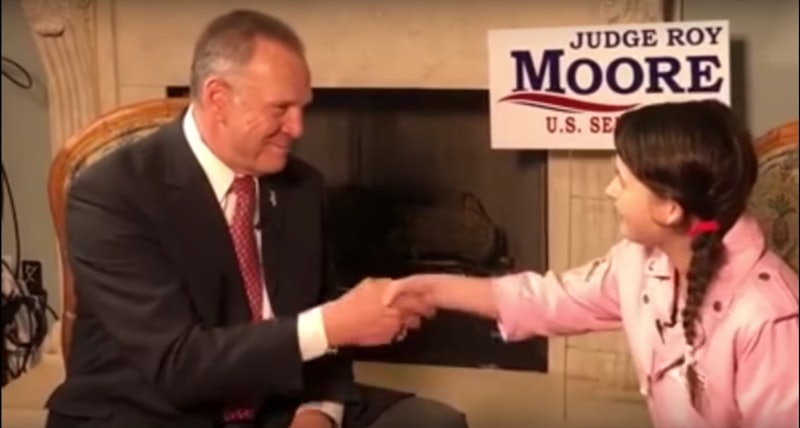 A pro-Trump group is doubling down on its support of Alabama's GOP Senate candidate in a somewhat questionable way. Though he's been accused of child molestation (accusations which he firmly denies as "fake news"), the America First Project sent 12-year-old Millie March to interview Roy Moore over the weekend. Though the interview itself is fairly innocuous (Moore largely doubles down on his stances regarding illegal immigration and religious liberty), choosing to have such a young Trump supporter meet with him certainly seems like an odd choice.

And, as reporter Alana Abramson noted on Twitter, some portions of the interview have the potential to be taken out of context. When March asks, "What's the age range or age group or what kind of people are supporting Judge Moore right now?," Moore's campaign manager replies, "I wish I could say it was the 11 and 12 year olds right now."

Moore has been accused of having pursued several teenage girls — including at least one as young as 14 — while he was in his 30s. On Sunday, during an interview with "The Voice of Alabama Politics," Moore denied the accusations:

I did not know them. I had no encounter with them. I never molested anyone, and for them to say that, I don't know why they're saying it, but it's not true.

The accusations have done little to persuade his most ardent supporters — including the president of the United States, Donald Trump. According to reports, Trump has cast doubts on the accusations, and at a Friday rally in Pensacola, Florida, Trump publicly endorsed the controversial Alabama judge, telling supporters to "get out and vote for Roy Moore."

The group behind the video, the America First Project, was founded by former staffers of Breitbart News and describes itself as a group of "Attack Dogs for President Trump's America First Agenda."

Moore's young interviewer went viral for her energetic endorsement of Trump at the 2017 Conservative Political Action Conference in February. In an interview conducted during CPAC, March said her support for Trump stemmed from his support of policies she found to be especially important.

I want him to be president because he'll let us keep our gun rights. And he will build a wall to protect us from illegal aliens who want to come into this country and sell drugs like cocaine, marijuana and heroin, and it hurts the American people.

Hillary Clinton, March added, had done "a horrible job" during her stint as a U.S. senator.

March's fame among Trump supporters even led her to meet President Trump, a moment she shared on Twitter along with the caption, "Me and Donald trump at the brand new trump hotel."

In an interview with Fox & Friends in July, March said that Trump was "doing the best job as a President as you could ever do," and added that she would even be willing to eventually run for office herself.

If the country needs me, I will run. I don't care about being the first female president.

In a another interview, conducted at CPAC with America First, March said she wasn't sure how she would run her own campaign, as the politics of the country may have changed.

"Maybe something will change [when I grow up]," she said. "Maybe the media will be a little bit nicer — not gonna happen — but, you know, I just don't know the way I should run yet. And maybe I won't know that until I'm ready to run for President — which is way after I'm 30, let's just say that."