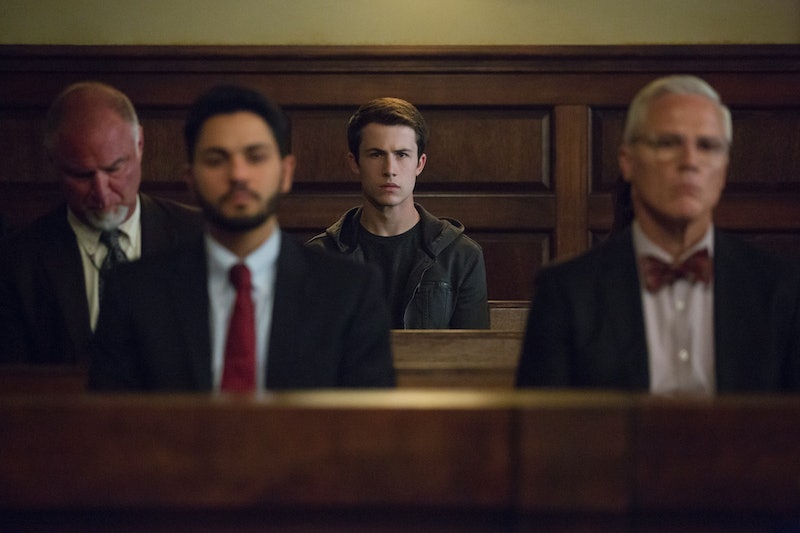 The 13 Reasons Why Season 3 trailer is finally here, and it has gotten fans buzzing for its shocking reveal: Bryce Walker is dead. At least, that's what it looks like. The clip teases that the main focus of the season will be figuring out who's behind Bryce's death, but there's one interesting aspect of the teaser that has fans scratching their heads. Who is the narrator in the 13 Reasons Why Season 3 trailer? It's a voice that fans haven't heard before, and it's definitely not the voice of previous narrators Clay (Dylan Minnette) or Hannah (Katherine Langford).

Though the clip doesn't identify the voice, Entertainment Weekly reported on Aug. 1 that Season 3 will see the introduction of a new character, Ani, who will be portrayed by Grace Saif. Ani appears in the trailer, trying to get what looks like a blood stain out of a white shirt, and EW reported that she will play a pivotal role on the show this season, implying that she just might be the voice fans hear in the new teaser.

There may be even more potential evidence to support this argument. Reddit user @deancest reported that British audio production company krADR spent a few weeks with Saif recording a voice over for 13 Reasons Why, as the company posted on their Facebook page. The Reddit user theorized that Saif must have a lot of lines if she was required to record ADR after filming had ended, which could very well mean a role as narrator. Additionally, Saif is a British actor, and the narrator's accent in the trailer sounds like she comes from across the pond.

This season will follow Clay, Justin, Jessica, Tony, Alex, Zach, and the rest of the Liberty High crew as they pick up the pieces following Tyler's attempted school shooting, a tragedy Clay and Tony prevented from happening. But Netflix's official synopsis, obtained by Bustle via press release, teases the arrival of a "shrewd outsider" who will helps the gang through a whole new investigation surrounding Bryce's "disappearance." The synopsis reads in part, "It’s up to a shrewd outsider to steer the group through an investigation that threatens to lay bare everyone’s deepest secrets."

Given that Saif is new to the show and seems to be taking on an important role this season, it's not a huge leap to say that Ani is the "shrewd outsider." And, if Ani is the outsider who strives to "lay bare everyone's deepest secrets," then it makes sense that she would also be the narrator. Who better to expose everyone than the person telling the story?

Not much is known about Saif, other than the fact that she's a relative newcomer to the screen acting scene, aside from bit roles in small projects. 13 Reasons Why is bound to be her breakout role. Her Twitter and Instagram accounts are currently private, but given photos posted by some of her castmates in which she's tagged, it seems that she's blended into the group very well.

It looks like Ani is about to shake things up at Liberty High, whether as a confidant to the highly fragile group or as a potential opponent. Fans will just have to wait to find out whose side she's really on.

More like this
Nicola Coughlan Shared A Lady Whistledown Excerpt From ‘Bridgerton’ Season 3
By Grace Wehniainen, Alyssa Lapid and Sam Ramsden
Here's When 'The Crown' Season 5 Will Premiere — And What To Expect
By Bustle Editors
'The Rings Of Power' Episode 4 May Put A Face To Season 1’s New Villain
By Kadin Burnett
The New Bachelor Will Be Announced Next Week & Here Are The Top Contenders
By Grace Wehniainen
Get Even More From Bustle — Sign Up For The Newsletter