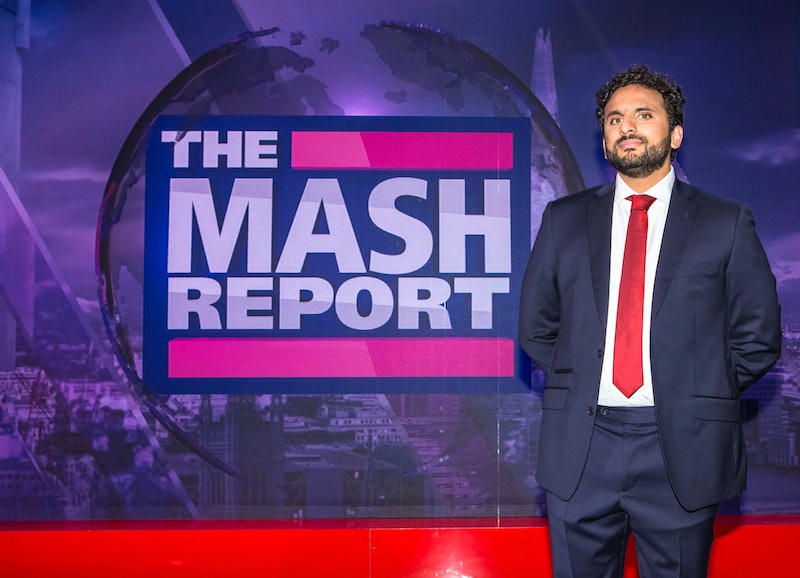 You’d be forgiven for thinking that a lot of what you see in the news right now is a bit of a joke. With the current Brexit deadline looming, a potential general election, and Prime Minister with no parliamentary majority British politics is a lot. Which makes it all the better that The Mash Report returns to the BBC this week. The hilarious, satirical, news-based comedy show has got a lot of material for season three and it’s frontman has made a serious name for himself. But who is Nish Kumar? If you haven’t seen Kumar on The Mash Report yet then you need to but he’s been working on a ton of other projects you may recognise him from.

Nish Kumar returns to The Mash Report on BBC Two on Sept. 5 and if you’re not quite sure what’s going on in politics right now fear not. Kumar, alongside a whole host of other "correspondents" is ready to decipher the crazy summer that’s past and work out what’s going on in Westminster with loads of laughs along the way. Kumar is the leading newsreader and host of the show and if you’re a fan of sarcasm he’s the comic for you. The Mash Report may have first aired in 2017 but Kumar’s career stretches much further back than that.

According to his website, Kumar found comic critical acclaim back in 2006 when he first started on the UK comedy circuit. After rave reviews after his performance at the Edinburgh Fringe Festival Kumar got his own show, Who Is Nish Kumar in 2012. He continued to tour on the stand-up circuit performing at the likes of Leicester Comedy Festival, Edinburgh, and Latitude Festival.

Speaking about his career in comedy to the Yorkshire Post he said, “I don’t come from a show business family but I used to record Chris Rock stand-up specials and go and watch people like Ross Noble. I was 20 before I had any idea of what I needed to do in order to make this my career, rather than it just being a pipe dream.”

Kumar has made British satire his bread and butter. He not only hosts The Mash Report but also BBC Radio 4’s Newsjack and had his own Comedy Central series, Joel and Nish vs The World. In Aug. 2019 he finished his solo comedy tour of his show It’s In Your Name To Destroy Yourself which took him all the way to Montreal.

You only need to watch one episode of The Mash Report to see that Kumar is seriously politically clued-up and while his jokes will have you in tears of laughter he really cares about what’s going on. He’s a regular on BBC Question Time and has spoken out about Brexit as a remain voter.

In an interview with the Guardian he said, “every day I wake up and think: ‘Am I part of the problem? Am I letting people think that by laughing at a joke they’ve participated democratically? And am I helping further entrench the political divide? All the raging mouthpieces of the right that I’m furious with, am I just the same but on the left?’ I have no easy answers to that.”

Extremely political, completely hilarious, and super charming it’s impossible not to listen to Kumar and laugh but also learn something new. In a time when it feels like if you don’t laugh you might cry The Mash Report is the perfect antidote. It returns to BBC Two on Sept. 5 at 10 p.m.