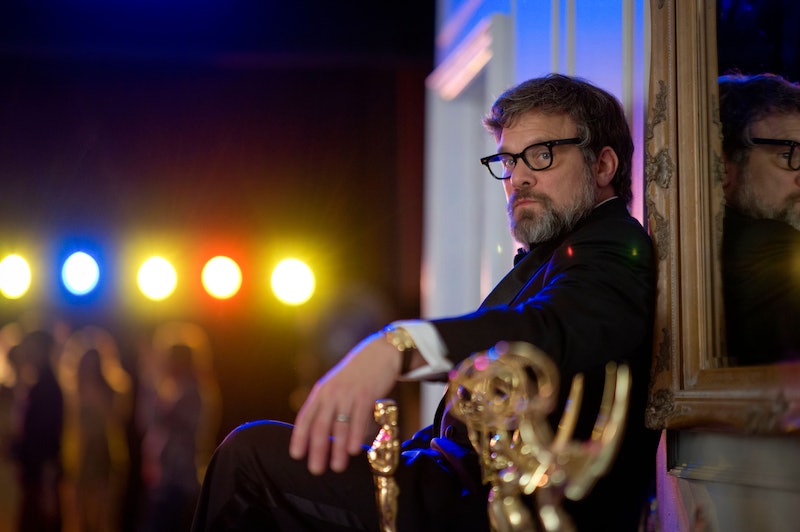 The U.S. drama Fosse/Verdon is explores Bob Fosse and Gwen Verdon's troubled relationship, and the series is based on the biography by author Sam Wasson, which documents the creative and romantic partnership between the two Broadway stars. The show's cast includes the likes of Norbert Leo Butz, Sam Rockwell, and Michelle Williams. But who is Norbert Leo Butz? Here's everything we know about the Fosse/Verdon star.

According to Playbill, Norbert Leo Butz is an American actor who was born in St. Louis, Missouri in 1967. In addition to his recent TV role, the actor boasts an impressive theatrical history, and has appeared in several major on-stage productions such as Big Fish, My Fair Lady, Wicked, and more. According to Vulture, Butz has several impressive accolades to his name, including two Tony Awards for his on-stage roles in Dirty Rotten Scoundrels and Catch Me If You Can — and 2013, the actor received an honorary degree from Webster University in his hometown of Missouri.

As previously mentioned, Butz currently stars in the U.S. biographical drama Fosse/Verdon, and according to the Express, the actor portrays the famed American playwright, Paddy Chayefsk. In real life, Chayefsky was known as being one of Bob Fosse’s closest friends, and he enjoyed a highly-celebrated career in both film and theatre — and according to the Radio Times, Paddy remains the only person in history to have won three solo Oscars in the Best Original Screenplay category.

The eight-part series, which is currently airing on BBC Two in the UK, centres around the complicated romantic and professional relationship between husband-and-wife Bob Fosse and Gwen Verdon. As reported by the Radio Times, Fosse was known as one of theatre world's most respected choreographers and directors. In 1960, he married his third wife Verdon, who was already a highly-acclaimed Broadway actor in her own right. The U.S. drama focuses on their years as a couple, and documents their lasting impact on the entertainment industry.

The first season of Fosse/Verdon has been well-received by critics, and currently holds an impressive 81 percent approval rating on the review-aggregation website Rotten Tomatoes. A critics consensus on the site reads, "Sam Rockwell and Michelle Williams give viewers plenty of razzle and dazzle in Fosse/Verdon — a straightforward miniseries that is hampered by rote biographical tropes, but still shimmies with the requisite glitz, grit, and all that jazz audiences crave."

One review by Keith Watson for Metro UK praised Sam Rockwell and Michelle Williams' "believable" portrayal of the couple's volatile relationship, and continued on to say that Fosse and Verdon's "classic creations are thrillingly recreated" throughout the TV drama. However, the show's underlying message is perhaps more significant than critical acclaim. According to The Wrap, Fosse/Verdon producer Joel Fields has previously discussed how the series depicts a powerful man who wasn't always so respectful of women, and stated that female-led movements such as #MeToo were a "big reason to do the story at this time."

Fosse/Verdon currently airs on Fridays at 9 p.m. on BBC Two, and if you haven't got around to watching this fantastic U.S. drama just yet, its about time you did.