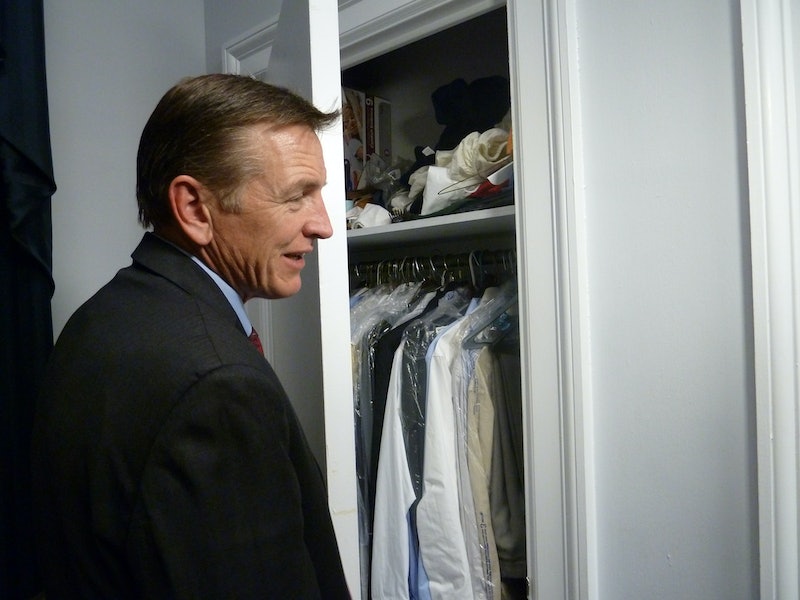 In a recent video interview with Vice News, Rep. Paul Gosar suggested a Charlottesville rally conspiracy theory that's completely maddening and totally ridiculous. The Republican congressman from Arizona alleged, among other things, that the white supremacist rally in Charlottesville, Virginia, which left one woman dead, may have been financially backed by known Democratic donor George Soros.

First, he proposed that the rally was organized by "an Obama sympathizer" who participated in the Occupy Wall Street protests. Then, without evidence and referring to the Charlottesville rally, Gosar said, "Maybe that was created by the Left."

When reporter Elle Reeve asked him to clarify, he described the Charlottesville Unite the Right rally organizer, Jason Kessler, as an "Obama sympathizer." He then proceeded to muse whether big-time Democratic donor Soros essentially funded a false flag protest:

And look at the background. You know, you know George Soros is one of those people that actually helps back these individuals. Who is he? I think he’s from Hungary. I think he was Jewish. And I think he turned in his own people to the Nazis. Better be careful where we go with those.

Reeve followed up by asking Gosar if he thought Soros funded the neo-Nazi march in Charlottesville.

"Wouldn’t it be interesting to find out?" he said.

As Vice went on to report, George Soros, who is, in fact Jewish, was born in 1930, making him extremely young when World War II happened. He would have been turning 14 the year Germans occupied Hungary, where he was born. These inflammatory accusations stem from a 60 Minutes interview in which Soros discusses his experience pretending to be a Christian in order to avoid being killed in the Holocaust.

A spokeswoman for the Open Society Foundations, a charitable organization founded by Soros, responded to the allegations in a statement sent to Vice:

George Soros survived the Nazi occupation of Hungary, and he has spent his life supporting efforts to ensure that such terrifying authoritarianism never takes root again.

He was 14 years old when the war ended. He did not collaborate with the Nazis. He did not help round up people. He did not confiscate anybody’s property. Such baseless allegations are insulting to the victims of the Holocaust, to all Jewish people, and to anyone who honors the truth. It is an affront to Mr. Soros and his family, who against the odds managed to survive one of the darkest moments in our history.

He abhors violence in any form and has never funded it. Never has. Never will.

Business Insider reported earlier this year that Soros has been the subject of conspiracy theories for decades. He has been donating to progressive causes for years, but there seems to have been an uptick in the accusations since Trump gained traction. Accusations against the donor are frequently seeped in anti-Semitic, paranoid undertones. Far-right pundits describe him as a person secretly controlling progressive operations, and as someone whose political use of his wealth is dangerous.

Pundits and other figures who have railed against Soros are people like Glenn Beck, Bill O'Reilly, Ann Coulter, Mike Cernovich, and the publication Breitbart.

The Unite the Right rally organizer, Jason Kessler, has reportedly said he voted for President Obama, but he also has a record of writing about white genocide on the internet.

Soros, of course, is a human being and therefore likely to have flaws, but the conspiracy theories about Soros that Rep. Gosar repeated have been entirely disproven. Instead, they serve to perpetuate paranoia, and particularly in this situation, to provide a scapegoat for the white supremacists who marched on Charlottesville. And even further, they disrespect Heather Heyer, the woman who died while protesting against the neo-Nazis.