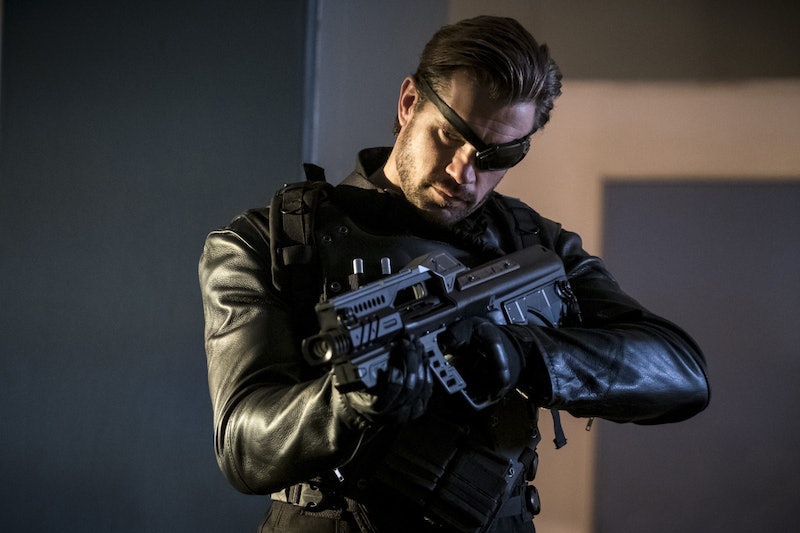 After a torturous hiatus, The Flash finally returns to our TVs on Tuesday, Jan. 24, and I am totally ready. Season 3 left fans on a bit of a cliffhanger, with Barry traveling into the future and seeing Savitar kill Iris. Now that it's back, we'll have to watch our lovable lead be tortured by this new information, which means the often goofy world of The Flash is about to get a whole lot more serious. As if Savitar wasn't enough of a threat already, the midseason premiere of The Flash will introduce Plunder, a sharp-shooting villain with a brief but dangerous history in DC Comics.

In the comic book universe, Plunder is a skilled assassin from a different reality who the Rogues unleash onto Barry's world. On The Flash, every new villain is also a possible Savitar follower and threat to Iris' future, so even though Plunder's comic book history doesn't connect him to that story, I wouldn't rule anything out.

There's a quick shot of The Flash's Plunder in the promo for Tuesday night's episode, which you can watch below, and it happens while Barry is still in the future. It seems that in this timeline, Plunder's alter ego, Jared Morillo, is in the news for being on trial. The fact that he is so close to Iris' potential time of death means that he could become important to stopping it from happening.

In the comics, Jared actually has an interesting story of his own, as explained by Inverse, and it gets complicated. On the page, Jared is a detective with healing powers who works with the Flash. That is, until Plunder, essentially Jared's doppelganger, tries to kill him and steals his identity. The switch is only uncovered when Jared's healing powers eventually help him recover from the attack, leading none other than Zoom (yes, the villain we saw in The Flash Season 2) to get rid of Plunder for good.

The Flash excels at bringing in fresh faces every week without it ever feeling forced, and Plunder, played by Stephen Huszar, should continue that tradition. His comic link to Zoom could be replaced with one to Savitar, letting this minor villain connect to that arc. Since this season has revolved around Barry changing the future by creating Flashpoint, Plunder's motivations could also go back to something Barry altered. Even for The Flash, Season 3 has been moving at a rapid speed and Plunder is bound to inject even more energy into its second half.