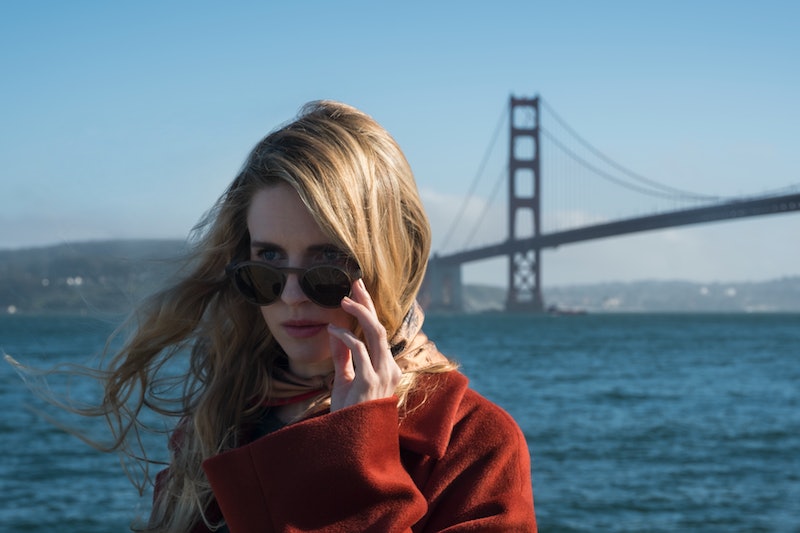 In Season 2, The OA took the old adage of "finding your tribe" to a new level with the concept of cosmic families (or constellations, as the show calls them). But a certain octopus also revealed that Prairie (OA? Brit? Who even knows anymore) may have another, like, real relative. So who is Prairie's brother on The OA? Someone is out there protecting her.

While Old Night, that talking octopus/medium we'd prefer to forget, is asking for Prairie/Nina's permission to kill her, he says that her survival is dependent on the decision of her brother. "I don't have a brother," she says — though she is only speaking from her memory as Prairie and what she's picked up from Nina. Old Night replies that "in every dimension, she sent him to protect you." Who is he? The "she" that Old Night is talking about most likely refers to Khatun, the older woman with Braille on her face that OA met during her NDEs in Season 1.

Then, the (mostly) dead OA has a vision that takes her to an airplane with a British pilot. She comes very close to looking directly at someone with short blonde hair (almost definitely the "Brit Marling" version of OA that Hap and Steve meet in the dimension we're introduced to in the Season 2 finale. None of that really helps us figure out who the mysterious brother is, unfortunately.

However, there are a lot of people assisting and protecting Brit Marling's characters in various dimensions on The OA. Here are some of the possibilities to ponder as we wait for Season 3.

He's the most likely, right? Prairie is immediately drawn to him in Season 1, and they look out for one another unconditionally. At the end of Season 2, he's the one that finds Brit and confronts Hap, having somehow traveled to the third dimension. Prairie would probably describe him as a little brother.

Then again, what if her brother is Hap himself? That's not ideal, as apparently the Jason Isaacs version of Hap is married to the Brit Marling version of Prairie. Inter-dimensional incest aside, Elodie did tell Prairie/Nina that she couldn't escape Hap. They were destined to find each other in all dimensions due to their strong connection.

He was chosen by the house on Nob Hill. He's the first person that the camera cuts to after Old Night introduces the concept of OA's brother, and he's the one that brings her back to life.

Some Combination Of All Of Them

While The OA has shown that each individual person exists in every dimension — looking the same but with a different life and not all of the same memories — OA's "brother" could be more of a symbolic figure. What if each of these people are the brother in different dimensions. Maybe it's Steve in Dimension 1, and Karim in Dimension 2?

Another potential brother who suddenly appeared wanting to help OA is FBI agent Elias Rahim (Riz Ahmed). In Season 1, he questioned Prairie, but also helped her adjust back to her previous life, and in Season 2 he is not only fully on board, but on a mission to save her.

This mysterious "brother" is just one of many mysteries that the Netflix series set up in the second season. As we rewatch The OA and if/when the show returns with more episodes, hopefully more dots will start to connect.

More like this
Mike Flanagan Teases 'The Midnight Club' In This Exclusive, Creepy Clip
By Grace Wehniainen
Caleb McLaughlin Details Racism From 'Stranger Things' Fans
By Radhika Menon
Glenda Cleveland Died 2 Decades After Trying To Turn In Neighbor Jeffery Dahmer
By Brad Witter
What’s New On Netflix: Ana De Armas’ 'Blonde' & A Nick Kroll Special
By Arya Roshanian
Get Even More From Bustle — Sign Up For The Newsletter