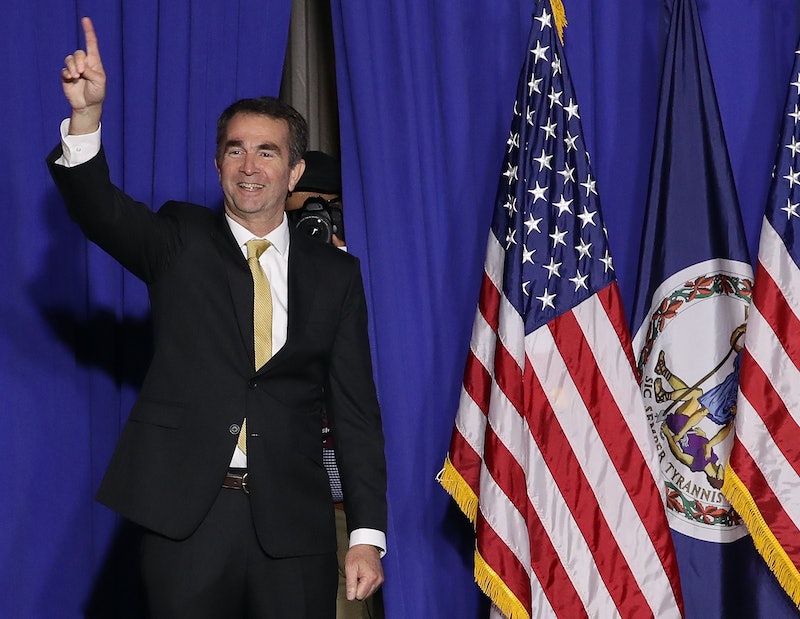 After a long day of inaugural festivities on Saturday, Virginia Gov. Ralph Northam and his wife, Pam, retired to their new bedroom to recuperate for the next day. But when they reached their room, nestled within the governor's mansion, something was a little off — the outgoing Virginian governor's face was plastered all over their pillowcases. With that, Northam and his wife found themselves victims to a hilarious gubernatorial prank, a storied Virginian tradition.

Printed across the top of the pillowcases, according to photos, was the proclamation, "Sleep when you're dead!" But, foreboding messages were not the end of the hijinks. At a brunch on Sunday, Northam revealed that his predecessor, Terry McAuliffe, didn't stop with bed linens - he left his visage peppered throughout the house.

"There are pictures of the governor all over the mansion that he left for me," Northam said, according to The Washington Post. "Also, at 3 o’clock this morning, an alarm clock went off, which I have yet to find. I texted him and thanked him, and he said there was more to come."

McAuliffe, for his part, was personally familiar with the pranking of gubernatorial successors, a tradition which has survived several changes of power in Virginia since the early aughts. Upon assuming office four years ago, he, too, was jolted to attention in the early hours of the day. The culprit? A prank alarm set for 4:00 a.m.. (McAuliffe was reportedly already awake by then, partially evading the surprise.)

Later that day, he stepped into his private bathroom to find a large, taxidermied black bear perched by the toilet. (It was reportedly borrowed from the natural resources secretary.) The bear was left, of course, by outgoing Republican Gov. Bob McDonnell, indicating that the pranking knows no political allegiance.

When now-Sen. Tim Kaine left office in 2010, he, in turn, left McDonnell a bunch of cell phones, hidden places difficult to locate - like inside elevator shafts. Reportedly, Kaine would call them from time to time, keeping McDonnell and his team on their toes. This prank lasted several days, until the governor and his staff could locate them all.

Which outgoing Virginian governor began the tradition of pranking predecessors is unclear, but it's developed into a highly anticipated event. Minor annoyances aside, the pranks also maintain a certain level of joviality - a welcome reprieve to the often cut-throat nature of party politics. (When Kaine took office, he found a life-size cutout of predecessor Gov. Mark Warner standing in his shower.)

Particularly in Northam's case, the lighthearted tomfoolery in the governor's mansion provided a moment of comic relief for a state which has recently been a focal point for intense ideological division. Earlier in January, the country watched as the winner of a tied election for the Virginia House of Delegates was decided by drawing lots. Shelly Simonds, who eventually lost, refused to concede the election for nearly a week.

By far, the election was not the only event to draw Virginia into the headlines in the last several months. Back in August, a white nationalist rally in Charlottesville, VA, left one woman, Heather Heyer, dead when a protestor drove a vehicle into a group of people. The so-called "Unite the Right" rally forced not only the Commonwealth, but the country as a whole, to grapple with the reality that neo-Nazi beliefs still survive in the minds of some Americans.

Northam, pranks aside, acknowledged the divisions in his state when delivering his inaugural address on Saturday. Known by many as a centrist, he called for increased civility and cross-aisle collaboration.

"It can be hard to find our way in a time when there’s so much shouting, when nasty, shallow tweets take the place of honest debate, and when scoring political points gets in the way of dealing with real problems," he told the crowd outside Virginia's capitol. He will hold office for four years.