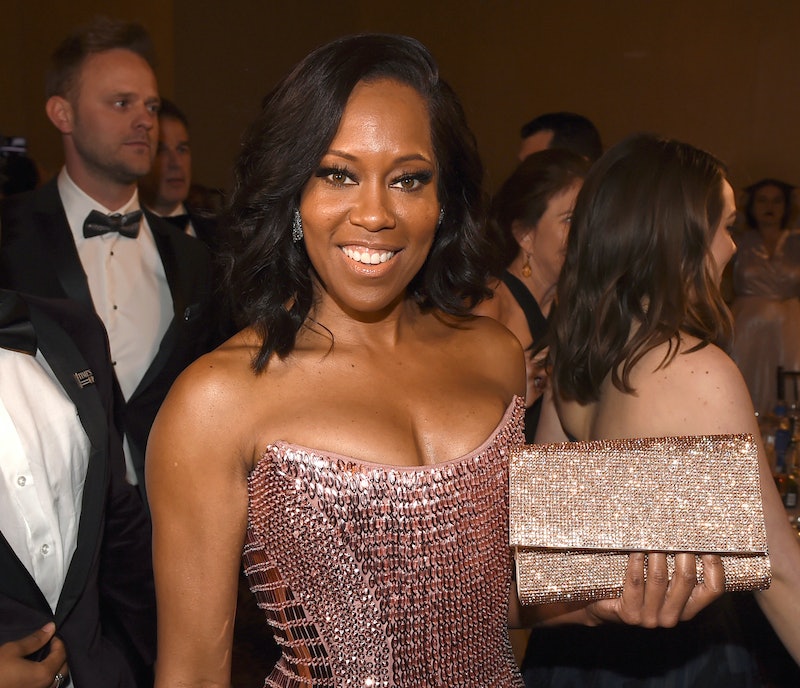 The 2019 Golden Globes honored some of the best films and television of the last year, but it also celebrated one of the most wholesome families in Hollywood. Multiple times throughout the evening, Regina King's son Ian Alexander, Jr. dominated the conversation on Twitter and became seemingly everyone's newest crush. The 22-year-old first drew attention during the E! coverage of the Golden Globes red carpet when he took the opportunity to tell host Ryan Seacrest that King is "a super mom."

"She doesn't let bad workdays come back and ruin the time that we have," he said. It's awesome to have a mother that I can enjoy spending time with." The fact that he used his time in the spotlight to talk about his love for his mother — and followed that up with a comment on Time's Up — instantly endeared him to those watching.

Later, during the ceremony proper, Alexander once again became a hot topic when King was awarded Best Supporting Actress for her performance in If Beale Street Could Talk. Alexander shot up out of his seat to embrace his mother for her first Golden Globe win, and she said in her speech that Beale Street was the first film in which her son said he felt seen.

But while Alexander was deeply affected by If Beale Street Could Talk, it's his existence that helped serve as inspiration for King's other nominated role of the evening: Latrice Butler, the mother of a son who is killed by a police officer, in Seven Seconds. In an interview with Corriente Latina, King shared that, "There are certain fears you have that are unique to having a black child in America ... you feel blessed or lucky that your child has made it to 22." She later reiterated the impact Alexander had on her performance in Seven Seconds while on the red carpet, saying that he "makes me happier than anything in the whole world ... To be in a space of a mother losing her child for six months was terrifying."

Family was a present theme throughout the entire Golden Globes ceremony, from Sandra Oh paying tribute to her parents while accepting the award for Best Actress in a TV drama to Jeff Bridges showcasing his brother Beau Bridges during his acceptance speech for the Cecil B. DeMille award. However, no familial pairing throughout the night was as joyous as that of King and Alexander, whose cheers and fist-pumping made King's win even more cheerful.

Alexander's appearance at the Golden Globes may have been fleeting, but King's win suggests that this will one of many stops on the King family's award tour, with other ceremonies (like, cough cough, the Oscars) in her near future. And though there may not be a formal award for Best Hollywood Son, Twitter has clearly proclaimed that Alexander has already won. Any other award show appearances of his are merely a victory lap, though he'll certainly be just as welcomed on any red carpet.

More like this
At 28, Lesley Manville Was Acting, Picketing, & Singing Kate Bush Songs
By Olivia-Anne Cleary
Here’s Everything Coming To & Leaving Netflix In August
By Jake Viswanath
What’s New On Netflix: 'Never Have I Ever' & 'Indian Matchmaking' Return
By Arya Roshanian
Everything To Know About The HBO Max & Discovery+ Streaming Service Merger
By Brad Witter
Get Even More From Bustle — Sign Up For The Newsletter