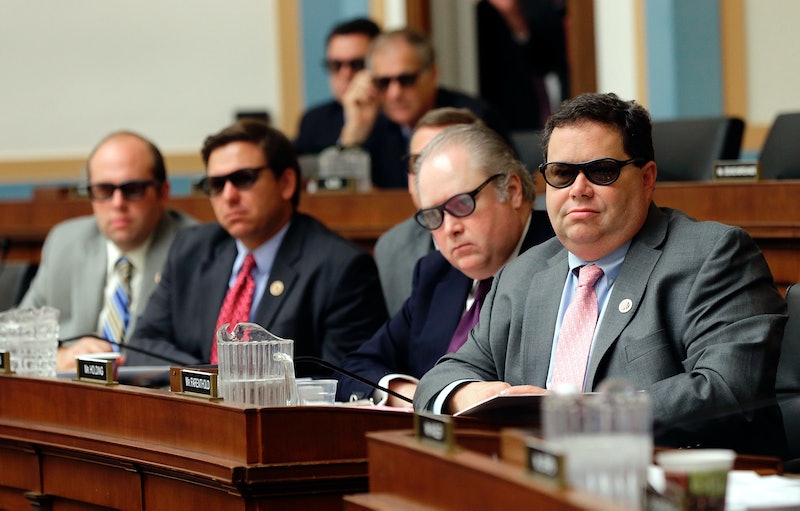 Some of the people that are opposed to this, there are female senators from the Northeast... If it was a guy from South Texas, I might ask him to step outside and settle this Aaron Burr-style.

To recap: Back in 1804, Vice President Aaron Burr and Treasury Secretary Alexander Hamilton engaged in a duel. Burr shot Hamilton, who died of his injuries the next day. But you probably knew this already if you have a working understanding of either American history or the musical Hamilton.

Flash-forward to the present day: Three female Republican senators — Shelley Moore Capito, Susan Collins, and Lisa Murkowski — publicly opposed their party's plan to repeal Obamacare without a viable replacement. Their actions all but killed the bill in Congress.

The women's actions have earned them disapproval from some members of the Republican Party, who believe that the senators let down the GOP by allowing Obamacare to continue. Farenthold is more than disapproving; he says he'd like to duel the women for speaking out against Trump's plan, but only if they were a "guy from South Texas." Because they are not, in fact, men from South Texas, Farenthold is not actually challenging them to a duel.

In his full remarks to his local radio show, Farenthold said:

The fact that the Senate does not have the courage to do some of the things that every Republican in the Senate promised to do is just absolutely repugnant to me. ... Some of the people that are opposed to this, there are female senators from the Northeast. ... If it was a guy from South Texas, I might ask him to step outside and settle this Aaron Burr-style.

This is not Farenthold's first brush with controversy. While running for his congressional seat in 2010, images emerged of his photographed with a model at a 2009 "pajama party." Farenthold had previously been sued for sexually harassing a staffer in 2014, and later said that he would support Trump even if the then-candidate actively supported sexual assault. (Farenthold later apologized.)

So there you have it: All of that nonsense over not repealing Obamacare could have been avoided if only we still relied on duels to make political decisions. Alas.