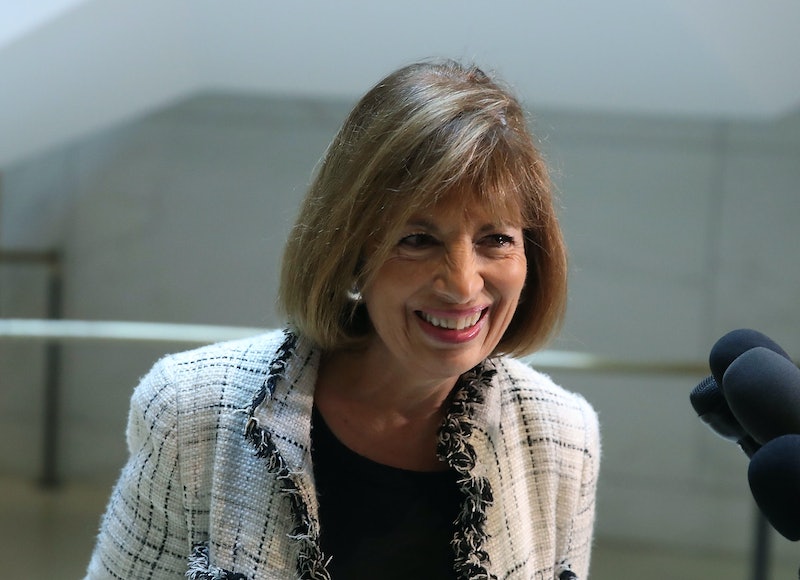 As the watershed #MeToo movement continues to take hold and actresses and media personalities come forward with their experiences with sexual assault, there has been mostly silence in Washington. Few female lawmakers have spoken out about the possible sexual harassment they might have endured while working in the government, but one congresswoman from California is setting out to change that. On Friday, Rep. Jackie Speier shared her own #MeToo story, called for other congressional staff to come forward with their experiences, and announced her plans to introduce legislation next week that will make is easier for victims to report sexual harassment in Capitol Hill.

"I was working as a congressional staffer. A chief of staff held my face, kissed me, and stuck his tongue in my mouth," Speier said in a video released on Twitter Friday morning. "I know what it's like to keep these things hidden deep down inside. Many of us in Congress know what it's like, because Congress has been a breeding ground for a hostile work environment for far too long."

Speier said she's urging other congressional staff to share their #MeToo stories. "It's time to throw back on the curtain on the repulsive behavior that has until now has thrived in the dark without consequences," she added.

Speier is setting out to overhaul the Office of Compliance's process for reporting harassment in order to make it easier for victims to come forward. The legislation, which is still being finalized and will be released next week, is the latest effort by Speier to push sexual harassment reform. Bustle has reached out to the OOC for comment.

"I wanted to encourage women to come forward by leading by example," Speier tells Bustle. "This happened so many decades ago, but I still remember it. I’ve done a good job of compartmentalizing it since then, but I don’t think women today should have to do that."

The new legislation is a three-pronged approach. A representative from Speier's office tells Bustle it would implement annual sexual harassment training for congressional members and staff, a mandatory climate survey, as well as reform the current complaint system through the OOC.

Unlike the executive branch, members of Congress and their staff aren't required to complete sexual harassment prevention training. Speier has previously introduced a resolution in 2014 to make such training mandatory, but it was never brought to a vote. The congresswoman has also pushed for giving more funds to the OOC for sexual harassment training in 2015. The amendment was approved in the House but was eventually dropped in the Senate.

"I want the system to change," Speier said. "I think that unless we can share via critical mass that this is an epidemic in the Capital, like everywhere else, there won't be motivation to change the system and require education and training necessary to protect victims and to hold perpetrators accountable."

Through the current system, government employees have to "go through hoops" in order to file a harassment complaint, Speier's office tells Bustle. Under a law passed in 1995, an employee who reports harassment has to undergo 30 days of counseling followed by another 15 days to begin a process of mediation with his or her employer. A congressional office is then charged with resolving the cases and when settlements for harassment cases do occur, members don't pay for them through office budgets, but instead come from the U.S. Treasury.

The current system could be discouraging to employees who already feel apprehensive about coming forward with sexual harassment claims, according to Speier's office: "If you’re coming forward with a complaint you’re already weighed the potential jeopardy to your job so that seems more of a discouraging tactic versus something that actually helps the complainant." Speier's legislation would attempt to speed up the timeline of the reporting process and to ensure that it's "not so one-sided to the employment office."

Speier thinks that the people at the OOC are "people of good will" but they're "frustrated by the fact that there's not a lot of interest in educating and training in Congress," she says. "And I want the office to be responsive to the victims and right now it isn't."

Speier's congressional record shows a broader initiative to combat sexual harassment and to make it easier for survivors to report their assaults. In 2015, the congresswoman introduced 11 sexual assault amendments to the military and in 2016, she introduced the Campus Sexual Assault Whistleblower Act, which would make it harder for colleges to retaliate against survivors of sexual assault.

"Sexual harassment is something that the congresswoman has worked on her whole career and in public service starting in California legislature," Speier's office representative says. "She has always said that as a woman in a position of power, if she doesn’t speak up for women who don’t have a voice, who’s going to? She felt that it was time to break her own personal silence to make people feel like they’re not alone; there’s someone in Congress who’s fighting on their behalf but also understood on a personal level."