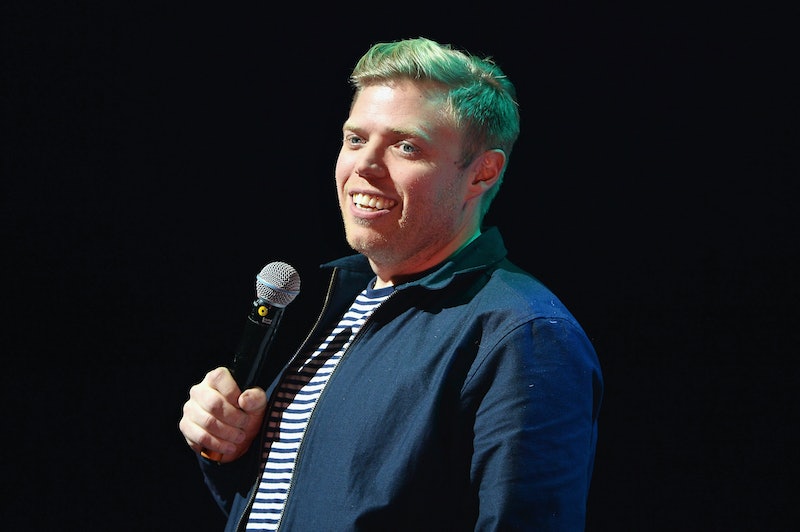 As much as I love seeing sparks fly between potential couples on Celeb's Go Dating, my night is almost always made by Rob Beckett's remarks as he narrates the show. Much like Iain Stirling on Love Island and Dave Lamb on Come Dine With Me, often it's their quick wit and comedic genius that produces the most memorable moments. Although, as funny as Beckett has been on Celebs Go Dating, he has mentioned his other half an awful lot and it's got me pretty intrigued. So, who is Rob Beckett's wife?

Beckett announced in 2014 during an episode of 8 Out of 10 Cats that he'd tied the knot with Louise Watts, as Heart radio reports. "I'm very lucky to be married," he said during a gig for Michael McIntyre's Big Show in 2016. "Let's be honest, I'm an odd-looking fella [aren't] I? I'm an acquired taste. I'm like marmite on an oyster."

He's spoken about his Watts a fair bit during his stand-up (and now Celeb's Go Dating), but during a 2017 comedy show, he mentioned that Watts is a teacher who puts up with him still being a kid at heart. "She's got a proper job, proper life. Changes kids lives, comes home and I'm doing Lego Ghostbusters."

During a YouTube video with fellow comedian Josh Widdicombe, he also confirmed that he and Watts had their first child. "I'll be honest, the reason I've got this [channel]... I've got a kid, and I can't play FIFA anymore, so I'm pretending this is work," he said during the video. Fair play, Beckett.

The comedian has also mentioned their child during interviews and got into a bit of hot water when he first found out that Watts was pregnant. When asked during an interview with Jonathan Ross about who he told first, Beckett revealed that footballer Peter Crouch was the first to know about the impending arrival of his and Watts first child.

"I knew you were going to do this to me because I've not told [Watts] this," he said. As he told Ross, while working together on a TV show, Beckett and Crouch went out for a few drinks. "And then, it was five in the morning, and I just went, 'Peter, I'm gonna be a Dad!' and no one else knew apart from me, Peter Crouch, and my wife. And she don't know that, so now I'm gonna be in trouble!"

And if you're in the mood for some more relatable banter, Beckett is going on tour in October this year. The tour, titled Wallop!, starts at the Bournemouth Pavillion on Oct. 1 for two nights, and ends at the O2 Apollo in Manchester on Dec. 14. If you can't make any of the dates on the roster, he's got a few more planned for Spring 2020 in London on March 6 and 7, and in Bristol on May 21.

For now though, there's plenty of Beckett comedy to enjoy thanks to Celebs Go Dating and his many appearances on panel shows.