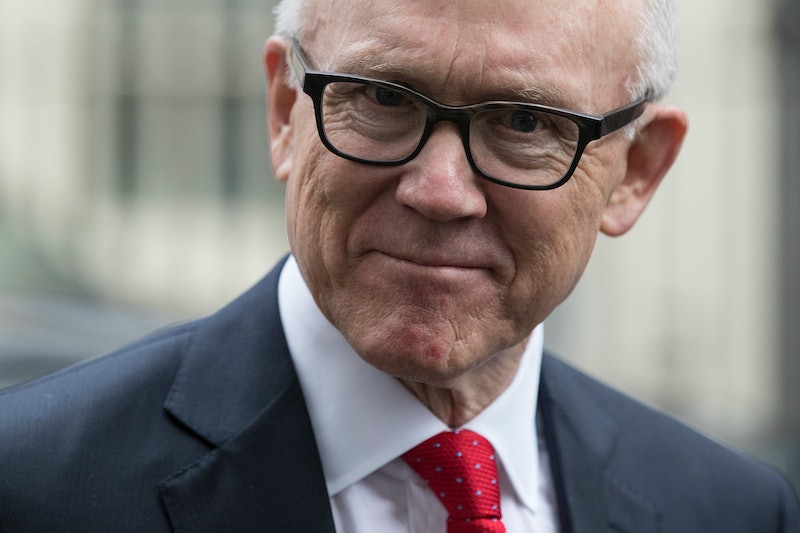 A new documentary is set to lift the lid on the inner-workings of the U.S. Embassy and the controversial new building, that according to Trump, put paid to his UK visit in February. The Channel 4 show will introduce us to the U.S. ambassador to the UK, the man at the heart of the (currently strained) special relationship between the two countries. But who is Robert Wood "Woody" Johnson and what do we learn about him in the new documentary?

The U.S. and UK's alliance has arguably never been so frosty. Donald Trump's presidency is massively unpopular in Britain, with a November 2017 Ipsos Mori poll showing that 78 percent of Britons feel his election was has lessened America's standing internationally. Meanwhile the President himself — not content with enacting policies condemned around the world — has stoked the fire by insulting the NHS and retweeting Islamophobic videos from far-right hate group Britain First, and then refusing to apologise for it until he made a lukewarm concession to Piers Morgan in January 2018.

While many of us Brits might be keeping our fingers firmly crossed for Theresa May to pull a Love Actually style shut down of Trump and everything he stands for, her criticism of him on issues like his Britain First tweets and his shocking policy of separating children from their families at the Mexico/U.S. border has been fairly weak. Why? Because, I assume, she hopes staying on Trump's good side will make it easier to secure an attractive UK/U.S. trade deal post-Brexit. And the man she hopes will help with that is U.S. ambassador Woody Johnson.

Here's everything you need to know about the U.S. ambassador to the UK, who is at the heart of Channel 4's new documentary.

What Is Woody Johnson's Background?

Johnson is the grandson of another Robert Wood Johnson, the cofounder of a cosmetic company you might have heard of — Johnson & Johnson. The ambassador even worked their during his summers as a teenager. Before being appointed to the role, the Guardian reports that the billionaire was best-known for owning the New York Jets American Football Team and being a prominent donor to the Republican party. He also founded Lupus charity, Lupus Research Alliance, and donated heavily to diabetes charities after his eldest daughter passed away from the condition. It's not his first political position, as he's also been a member of the U.S. government's Export Council and the President's Commission on the White House Fellows. Johnson has been married twice. His first marriage, to Nancy Sale Johnson, lasted from 1977 to 2001 and produced three children. In 2009, he married Suzanne Ircha Johnson; the pair are still married, and have two children.

What Is Woody Johnson's Connection To Trump?

Trump is the head of the Republican party and Johnson is a longtime official member. The Telegraph reports that Johnson was a top donor to Trump's political campaign, switching his support quite quickly after his preferred first candidate, Jeb Bush, was eliminated. The newspaper also reports that Johnson attended Trump's 2005 nuptials to Melania. Unsurprisingly, Johnson's a big fan of his boss, calling him "thick-skinned" on LBC radio when asked if Trump would be bothered by the threat of protests during his visit to London, and, according to reports in City AM, said "he could be the best President since Reagan". Hmmm.

The pair did, however, disagree over Trump's comments about the new embassy building, which the President branded "a bad deal." Johnson, meanwhile, wrote in the Evening Standard: “The new embassy is not just bigger, it is better and capable of meeting the complex challenges of the 21st century and beyond. It is the most secure, hi-tech and environmentally friendly embassy that the United States has ever built.”

What Does He Think About Brexit?

Now given he's going to have a pretty important part to play in one of our major post-Brexit trade deals, it's worth knowing what Johnson thinkings about our exit from the EU right? Well, perhaps unsurprisingly, his views appear to mirror Trump's (who told Michael Gove in an interview with The Times that Brexit will be a "great thing" for the UK). In the documentary, Johnson discusses what he considers to be a "defeatist" attitude towards Brexit in Britain, urging people not to be "pessimistic."

Inside the Embassy begins Monday, June 25 at 9 p.m. on Channel 4