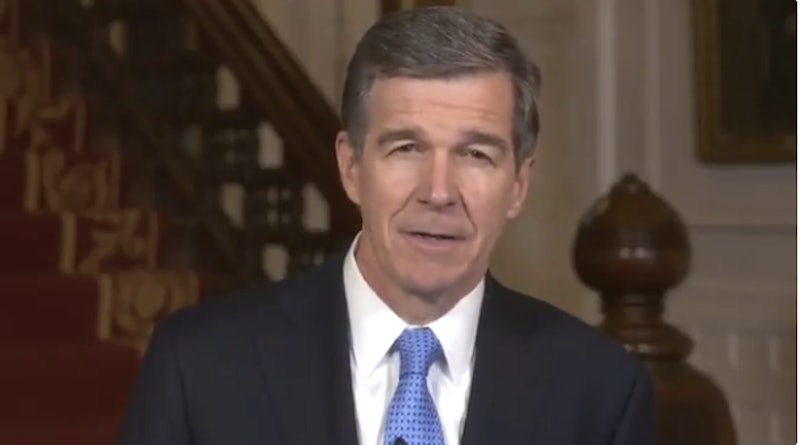 On Tuesday night, a few days after deadly violence over the removal of a Confederate monument rocked Charlottesville, VA., North Carolina Gov. Roy Cooper said all Confederate statues should be removed. “Some people cling to the belief that the Civil War was fought over states’ rights. But history is not on their side," Cooper, a Democrat, said. "We cannot continue to glorify a war against the United States of America fought in the defense of slavery. These monuments should come down.”

On Saturday, Charlottesville, descended into turmoil when a dispute over the removal of a statue of Confederate General Robert E. Lee turned deadly. The victim, 32-year-old Heather Heyer, was among the counter-protesters who assembled to rally against white supremacist demonstrators drawn to the so-called "Unite The Right" rally. Heyer was killed after a car drove into a group of counter-protestors.

"Last weekend, I watched with horror as events in Charlottesville unfolded," Gov. Cooper wrote in his Medium post announcing his support for removing Confederate monuments. "Having served as North Carolina Attorney General for 16 years, I am all too familiar with the racism, bigotry and full-out white supremacy that exist in corners of our society."

Cooper's call for the removal of Confederate statues came shortly before the city of Baltimore undertook an overnight plan to remove the contentious monuments. “These people were terrorists. They were traitors. Why are we honoring them?” Baltimore Councilman Brandon M. Scott said on Monday, prior to the monuments' removal, according to The New York Times.

Confederate symbols have long been a point of tension in American society. However, in recent years, elected officials have begun to support their removal. In 2015, Republican Nikki Haley, who was then governor of South Carolina, decided that the Confederate flag should be removed from the state's capitol grounds. "Today we are here in a moment of unity in our state without ill will to say it is time to remove the flag from our capitol grounds," Haley said at the time, according to CNN. "This flag, while an integral part of our past, does not represent the future of our great state."

However, these calls to remove memorials dedicated to Confederate America stand in stark contrast to President Donald Trump's most recent remarks on the violence in Charlottesville. After condemning white supremacists following blowback to his initial remarks on Charlottesville that there was violence "on many sides," the president on Tuesday did an about-face, claiming that the "alt-left" counter-protestors were "very, very violent" and misguided in their desire to see the Robert E. Lee statue removed.

“Many of those people were there to protest the taking down of the statue of Robert E. Lee,” Trump said. “So this week, it is Robert E. Lee. I noticed that Stonewall Jackson is coming down. I wonder, is it George Washington next week? And is it Thomas Jefferson the week after? You know, you really do have to ask yourself, where does it stop?”

For Gov. Cooper, the removal of Confederate monuments is important as they memorialize deeply racist practices. Nonetheless, Cooper said, their removal should be handled delicately: "As President Lincoln said, we must do this work “with malice toward none, with charity for all, with firmness in the right as God gives us to see the right, let us strive on to finish the work we are in to bind up the nation’s wounds.”