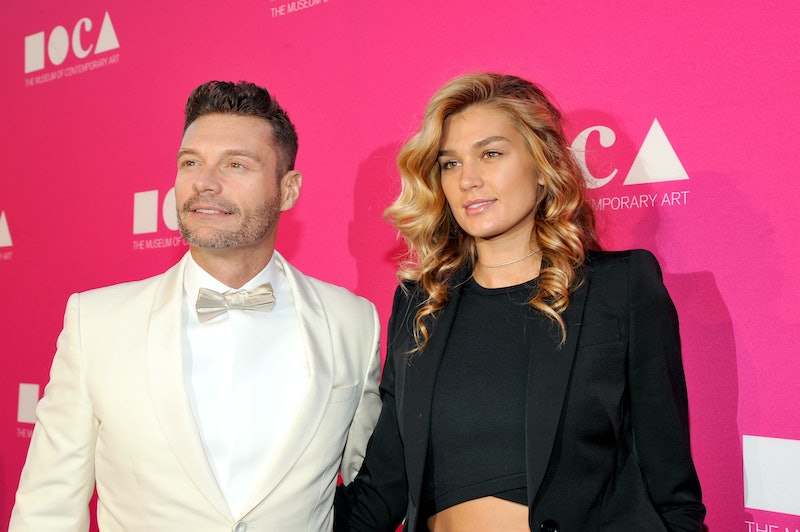 Ryan Seacrest has had a lot to celebrate lately. The former American Idol host and current On Air with Ryan Seacrest host recently snagged the gig of a lifetime co-hosting Live with Kelly and Ryan alongside Kelly Ripa. Seacrest made the cross-country move from Los Angeles to New York, where his new show is filmed, and moved in with his current partner, Shayna Taylor. So who is Ryan Seacrest's girlfriend? His current flame is a woman of many talents.

Ryan Seacrest is currently dating a model named Shayna Taylor. The couple recently made their relationship Instagram official when Taylor took to the social media platform to share a photo of herself and Seacrest adorably cuddled up on the beach. The sweet photo shows the two of them sitting in a beach chair, with Seacrest wrapping his arms around Taylor and giving her a small kiss on the neck. According to People, the host dated Taylor a few years ago, and the two just recently rekindled their flame over the last year and moved into a New York City apartment in early May to make things extra official.

Though Shayna Taylor doesn't appear to be as well known as Seacrest, her schedule is likely just as jam-packed as her media giant boyfriend. On top of being signed to Wilhelmina Models, Taylor is also a chef and personal trainer. The 26-year-old beauty has her own food blog and Instagram account called My Bikini Kitchen, which she uses to share healthy recipes and fitness tips with her followers.

Along with posting workout videos and promoting her delicious-looking recipes, Shayna has also shared a few photos from previous shoots she's participated in.

The couple appears to be a little private about their relationship, but hopefully we'll see a lot more adorable photos of them in the future.