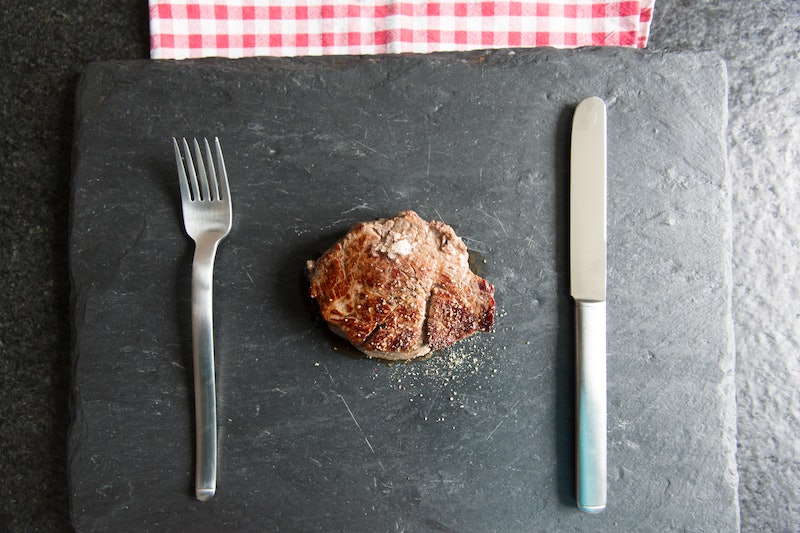 A prime cut, grade-A meme has quickly become the latest Twitter sensation, leaving many a carnivore wondering, “Who is Salt Bae?” Over the weekend, videos of seriously snazzy chef and butcher, Nusret Gökçe, sensually wielding a blade and preparing gorgeous cuts of meat went viral. It seems Nusret Gökçe, lovingly dubbed #saltbae by the Twitterverse, has many talents. Not only does he salt his steaks with such flare that Bruno Mars tweeted out a picture of him on Jan. 8, but moreover, he can make a vest and white T-shirt look damn sexy — quite an accomplishment in my book.

The Turkish restauranteur is co-owner of the popular self-titled steak house Nusr-Et. The restaurant, with six locations in Turkey and Dubai, has quite the celebrity clientele, but it was the foody videos on Gökçe's Instagram page that earned him world-wide notoriety, and fueled the viral love affair. With 1.1 million Instagram followers, this chef is by no means unknown; indeed, his almost expert treatment of meat has earned him celebrity status in Turkey, as well as a large fanbase for his restaurant empire.

While Twitter's obsession with this round-sunglass wearing meat god is now bordering on infatuation, Gökçe faced his fair share of struggles as a young man. In an interview with Turkish news outlet Aksam, the chef revealed that growing up as one of five children of a miner, he left school early due to financial difficulties. He eventually found his way into the restaurant industry as a butcher's apprentice, and after improving on his skills while living in Argentina (one of the world's great steak capitals), he opened his first restaurant.

It seems appropriate that memes of the hardworking chef have become synonymous with being or doing "extra."

Maintaining his restaurant empire and frequently pulling 18 hour shifts, Salt Bae has little time for rest — and the memes haven't slowed down either.

When it comes to all things steak, this man has nothing but bold confidence in a job well done. Bruno Mars likened his finishing salt sprinkle to the perfect mic-drop moment.

Some Twitter users are even appealing to Apple on the grounds that Salt Bae deserves his own emoji. A cleverly combined mash-up of the muscle arm and "okay" hand emojis have come to symbolize Salt Bae's infamous finishing flourish.

If you want to make Salt Bae your actual bae, though, it seems he is already taken. Salt Bae is quite the family man, with as many as nine kids, whom he posted a picture of on Instagram. So it seems we need to keep dreaming of one day finding someone as extra as Salt Bae... and in the meantime, at least we have his fabulous, anemia-curing videos.

More like this
Why TikTok Is Obsessed With Caesar Salads Right Now
By Alexis Morillo
The Real Reason Your Instagram Story Viewers Show Up In That Order
By Emma Carey
15 Halloween Costumes Inspired By TikTok Trends
By Emma Carey
Behind The Hilarity Of The "POV: You Walk Into My Room" TikTok Trend
By Lexi Inks
Get Even More From Bustle — Sign Up For The Newsletter