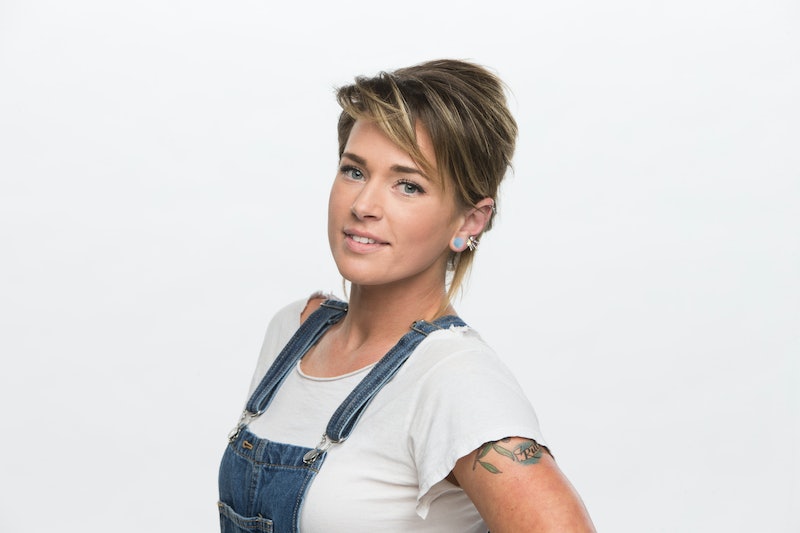 Houseguest Sam Bledsoe on Big Brother 20 could follow one of two paths during her time in the Big Brother house: She could ease her way into the hearts of viewers with her charming accent and sweet smile, or she could rub them the wrong way with her toughened welder's outer shell. Either way, this hairdresser-turned-welder from Stuarts Draft, Virginia, is a force to be reckoned with, and fans will likely be curious to know more about her. So who is Sam on Big Brother?

Sam's professional background — as a hairdresser, bartender, and then welder fabricator, according to her official CBS bio — has molded her to embrace challenge. She told Entertainment Tonight that she works 60 to 70 hours per week, so she knows how to be tough when a situation calls for it. But she also has the compassion to look for the best in people, which she says could be a weakness and a strength while competing against 15 other houseguests for the grand prize of $500,000.

"My greatest strength is also my weakness," Sam told Ross Mathews in an interview. "I'm just a really genuine person. I'm a good judge of character for that, I guess, intuitive. But, at the same time, I always see the good in people. In the real world, that's a good thing ... but, in this particular case, I'm gonna have to learn to shut that off."

That quality also ties into the one thing she says she absolutely will not tolerate in the house. "I will not stand for a bully," she told Mathews. "I always root for the underdog, and I'm always there for anybody that needs a helping hand." When she was asked if she would rather win and be hated or lose and be loved by viewers, she said it could go either way. But she plans to be mindful of the fact that young girls will be watching and potentially modeling her behavior on the show. "I won't do anything against my morals," she said. "But if I do something against a particular houseguest that everybody was just in love with, then I would say win and be hated for that."

Regardless, Sam describes herself as the word that's tattooed on her arm, just below the portrait of a bright bluebird: ruthless. She actually got the tattoo in honor of her grandmother, who was named Ruth, but it has dual meaning in that it represents her as a person, as well. "In general, I'm an altruistic, magnanimous type of person," she told Mathews. "I bring my own sunshine."

Sam's stint on Big Brother will be one of the few times she has left her small hometown and her family. She may not miss the fast-paced, physical demands of her job as a welder ("I've never been to a gym, this is all just work muscles," she told ET, mid-flex), but she said she is going to miss her family. And bourbon, which is not allowed in front of the 94 HD cameras hidden in the Big Brother house.

Of course, Sam hopes to stay the full 12 weeks and become the Season 20 winner, and she says that the three months away from her daily glass of bourbon might be good for her — a cleanse that could pair well with her continued healing after a difficult recent breakup. That's why she has no intention of getting involved a "showmance," per her ET interview. "This has been a healing opportunity in that sense too," she said. "I'm just plainly not interested, not ready. Heart's still healing."

While her current relationship status is "in a committed relationship with bourbon," and bourbon only, the house may have other plans for her and her sweet Virginia charm. And that's where the tough-as-nails welder's shell may have to come into play.