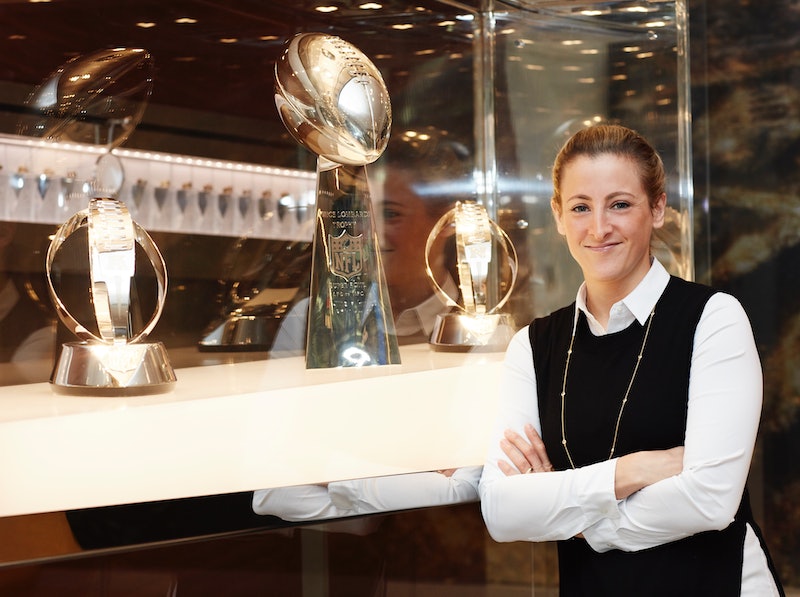 From the field to the sidelines to the broadcasting booth, football is a male-dominated sport. But the NFL isn't interested in being a boy's club forever: to help get more women careers in football, it's tapped the talents and knowledge of a woman who forged her own path to a career with the league 15 years ago. As the NFL's director of football development, Samantha Rapoport is working to create a pipeline for women interested in tackling a career in football.

Growing up in Canada, Rapoport fell in love with American football at an early age. "I played a lot of sports and I felt very average at all of them but as soon as I started playing football I felt like it was something I was good at. It was something that I enjoyed so much," Rapoport tells Bustle. "Football is in my blood, it always has been. I have a strong passion for it and the hundreds of thousands of women I come in contact with feel the exact same way."

While football has traditionally been a male-dominated sport, there's a significant number of women who not only play and love the game, but also understand its nuances and are eager to get a foot in the door. In fact, the NFL noted that women made up 45 percent of its fan base in 2017. A few have managed to forge their own paths to careers in the NFL through hard work, persistence, and, in Rapoport's case, an incredibly creative Hail Mary pass. To land an internship at the NFL League office in 2003, she mailed her resume along with a football and a note asking, "What other quarterback could accurately deliver a football 386 miles?"

For Rapoport, the challenge now lies in figuring out how to help other women with a similar passion and understanding for football land careers in the sport. There aren't as many pathways to football jobs available to women, since they don't have the same opportunities to forge organic connections and conversations with football hiring managers as men who grow up playing the sport do, she notes. It's something Rapoport has been working to change since being named NFL director of football development. In creating programs designed to inspire, engage, and connect women to the sport, Rapoport hopes to break down barriers and forge more career pathways for them.

"There are so many women in this country that know football, that love football," Rapoport tells Bustle. "I really saw this opportunity for us to create programming around not only women that play, but also women that want to be involved similarly to how I was dying to be involved when I was 21."

To boost involvement, Rapoport created the NFL Women's Careers in Football Forum in 2017. In its first year, the forum brought in NFL team owners, coaches, and general managers to speak to 220 female tackle football players about the different areas that exist within football operations. The goal was to help participants identify if, where, and how they could launch a career in the sport. Out of that first event, 22 women have gone on to work in football operations across the professional, collegiate, and high school levels. Nine women ended up securing positions for coaching and scouting in NFL training camps.

This year, however, Rapoport narrowed the forum's focus to women who already knew they wanted a career in football operations but needed help getting their foot in the door. "Not only are we trying to inspire women to apply and create this opportunity for them, but we're really challenging them to get their resumes on the [appropriate person's] desk because people can't hire women or minorities if they're not getting their resumes," Rapoport says.

"At the end of the day, for our clubs, it's about winning. You can't be the best if you look at half the country."

According to Rapoport, the idea of actively working to involve more women in football didn't just come from women, but from a number of NFL teams eager to have a larger and more diverse candidate pool to pull from. "At the end of the day, for our clubs, it's about winning," Rapoport says. "You can't be the best if you look at half the country. If you want the best college football players and you only look at half of the country, you're certainly going to miss out on half the talent. It's the same principle with women or any minority population."

Yet the Women’s Careers in Football Forum isn't the only way the NFL is pushing for gender diversity. A few years ago, the NFL expanded a league policy known as the Rooney Rule, which requires minority candidates to be interviewed for senior football operations positions before a hiring decision is made, to include women. The league also is hosting its third annual "In The Huddle" Women's Summit on Friday to discuss how in can continue to support women's advancement both on and off the field.

These efforts are starting to pay off. Sarah Thomas was named the NFL's first female referee in 2015. That same year, Jennifer Welter became the first woman to take on a coaching position within the NFL when she landed an assistant coaching internship with the Arizona Cardinals. Kathryn Smith then became the NFL's first full-time female coach in 2016 after accepting a position with the Buffalo Bills (Smith was not retained by the Bill's new coach, Sean McDermott, for the 2017 season).

But Rapoport isn't content to simply bring more women into the NFL. "Our ultimate mission with this is to normalize females on the sidelines of football," she tells Bustle. And while she and her team have been working to bring more and more NFL executives on board and inspire more women to apply, she's not satisfied with having just one woman on the sidelines.

"It's certainly exciting to celebrate the first women coach and the first women official ... but to have two means a little bit less tension on the one to carry the torch for an entire population."

"The NFL has experienced a lot of firsts as it pertains to gender diversity since 2015, but the next stage of that is multiple women in a position," she says of her desire to increase women's representation in the sport. "It's certainly exciting to celebrate the first women coach and the first women official and what have you, but to have two [women] means a little bit less tension on the one, a little less pressure on the one to carry the torch for an entire population. It allows for a greater chance for them to succeed and that’s what we’re moving towards."

Rapoport hopes to get to a point where women working in football is so commonplace that it ceases to be a talking point. "My hope for the future is that we normalize seeing women on the sidelines of football to a point where we are no longer discussing it and we stop using the terms 'a woman coach, woman scout, and woman official' and it just becomes 'an official,'" she says.

And while Rapoport knows gender inclusion can be an uphill battle, she's rising to the challenge. "This is certainly a long term process that we’re trying to achieve," she says, "and we aren't going to pat ourselves on the back for any success that we see in the next two, three, four years, but that really is my hope, the normalization."

More like this
At 14, Tatiana Maslany Was Obsessing Over Tamagotchis & The Spice Girls
By Gabrielle Bondi
Beyoncé & Madonna’s “Break My Soul” Remix Honors A Group Of Black Icons
By Stephanie Topacio Long
Naomi Osaka & Emma Raducanu’s Experiences Have Inspired A New Amazon Show
By El Hunt
Which Cast Member of 'Westworld' Season 4 Has the Highest Net Worth?
By Meg Walters
Get Even More From Bustle — Sign Up For The Newsletter