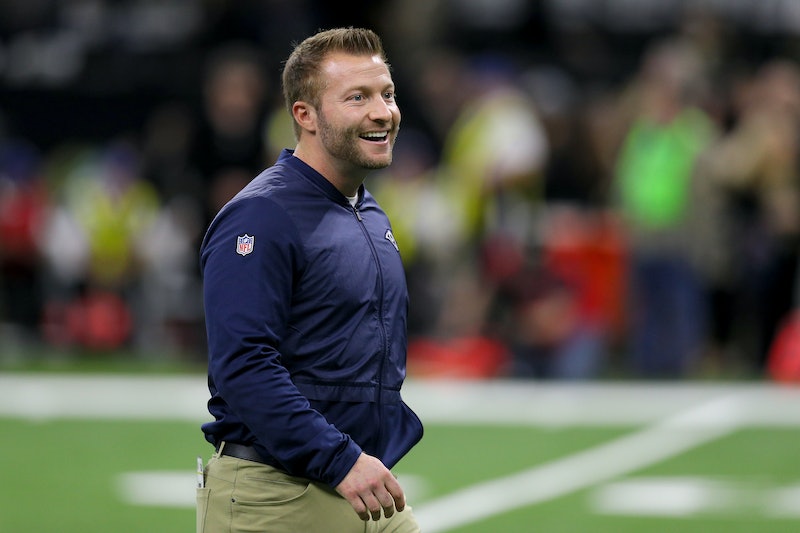 As the youngest head coach in the NFL, it's hard not to notice Super Bowl-bound Sean McVay. It's also hard not to notice that he tends to have a lovely lady cheering him on from the sidelines. So, who is Sean McVay's girlfriend? The Los Angeles Rams coach is dating a model named Veronika Khomyn, and — sorry everybody, but — they've been together for a while.

It's not exactly clear when McVay and Khomyn first started dating, but The Atlanta Journal-Constitution pegs the timeline between 2011 and 2013. During that period, McVay was working as the assistant tight ends coach for the Washington Redskins, and Ukrainian-born Khomyn was attending George Mason University in Fairfax, Virginia, the publication noted.

Now, as for how they met, well, that's unclear, too. Since Fairfax and Washington, D.C. — which is where the Redskins are based — are only about 20 miles apart, though, it wouldn't be surprising if Khomyn came into D.C. every now and then. And there's definitely a bigger nightlife there than in Fairfax, so perhaps they simply met in the wild of the nation's capital.

Anyway, they've been dating for a while. After McVay was named the head coach of the Rams in 2017, the couple moved into a sprawling mansion together in Encino, California. Seriously, it's huge. According to Atlanta's WSB-TV, their 6-bedroom, 6-bathroom humble abode is 4,660 square-feet, and was purchased for a cool $2.71 million.

Khomyn has been getting all kinds of attention since the Rams started winning games this year. After they defeated the Dallas Cowboys and advanced to the semi-finals, the 29-year-old model posted a photo on Instagram that showed her sporting a t-shirt with her man's face on the front that read "McBae." Pretty cute, right? "Onto the final four," she captioned the pic.

McVay doesn't have an Instagram himself, but Khomyn posts plenty about their relationship on her page. Fair warning, though: Scrolling through her feed might make you a wee bit envious. They definitely do a lot of cool stuff. They also have a super cute puppy named Kali, who happens to have an Instagram account of her own.

The couple appears to have an affinity for traveling, and visited the Eiffel Tower in Paris back in July 2017. They also like to get dressed up and go on fancy-looking dates. Also evidenced by her Instagram, Khomyn joins McVay at award shows and events, and they rounded up a bunch of friends for a boat ride in Malibu last summer.

Most importantly, though, Khomyn is McVay's biggest fan. She's shared several photos from the sidelines of Rams games, and appears to sincerely enjoy cheering on her man's team.

After the Rams advanced to the Super Bowl, fans got a sneak peek into their post-game celebration, courtesy of a video on Khomyn's Instagram. In the clip, McVay is being hoisted up and down by a few members of his team, and you can hear Khomyn gleefully "woo"-ing in the background. "Super Bowl bound baby!" she captioned the post.

Whether or not the Rams will be able to defeat the New England Patriots in the Super Bowl this year remains to be seen. One thing's for sure, though: fans are bound to see Khomyn cheering on the sidelines.