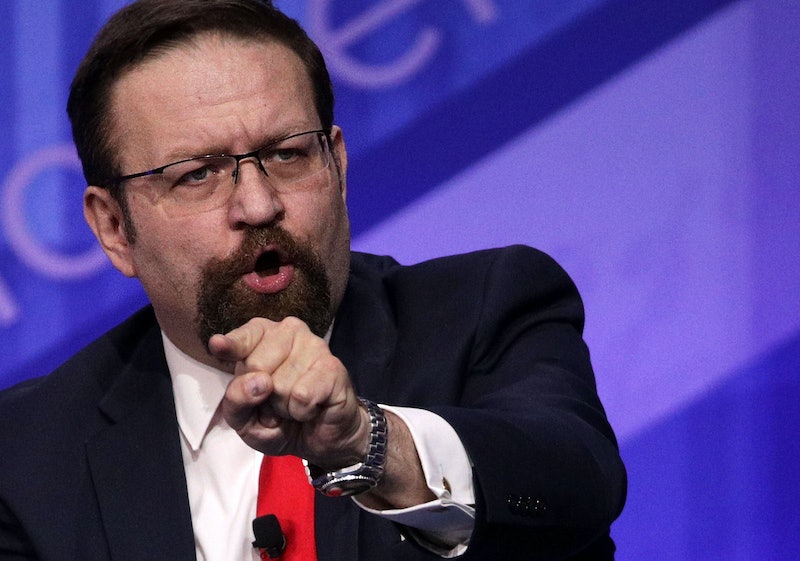 Throughout his presidential campaign, Trump vowed to shake up the establishment, and he at least partially did that by filling his administration with a mix of established conservatives and political outsiders. This strategy, however, has had its setbacks. Now, former Breitbart news editor and Trump national security aide Sebastian Gorka might be leaving the Trump administration after controversy over his alleged ties to far-right groups in Hungary mounted. Gorka strongly denies those ties.

According to The Daily Beast, two senior White House officials claimed that the Trump Administration is attempting to remove Gorka from his position and instead place him at another federal agency that doesn't require a security clearance. The officials also said that Gorka is allegedly no longer being consulted on policy decisions for the National Security Council, which he is a part of. Bustle reached out to both the White House and Gorka for comment, but had not heard back at the time of ublication.

Gorka, a British-born Hungarian who gained American citizenship in 2012, has been a polarizing figure since he first entered politics in Hungary in the 1990s. He was denied Hungarian security clearance in 2002 when he sought a position on a government panel, according to BuzzFeed, because of his alleged ties to Vitézi Rend, a Nazi-allied order that imposed restrictive anti-Jewish laws in Hungary and collaborated with Hitler during the Holocaust. Gorka denies that he has any ties to the group, although he wore a medal typically worn by Vitézi Rend members to Trump's Inaugural ball in January. In an interview with Tablet magazine, however, Gorka insisted he had never taken an oath to join the group.

Gorka, a close friend of Steve Bannon, first became involved in Trump's administration in 2015 as a policy consultant for the campaign. After Trump's victory in November, Gorka joined the administration as a national security aide. He has been an outspoken supporter of Trump's proposed travel ban that would limit citizens of seven Muslim-majority countries from entering the United States. He has also been adamant about the administration's use of the term "radical Islamic terrorism," which he feels is necessary in order to combat terrorism.

Throughout the past couple of years, Gorka has been an enthusiastic supporter of President Trump, and has represented him through various television appearances, often speaking out against Islamist extremists. In particular, he made headlines in March for refusing to say whether or not Trump believes Islam is a religion during an interview with NPR.

Though Gorka was never able to make a substantial impact on the administration's policies due to his alleged lack of security clearance, his public appearances that lambasted the media as "fake news" and presented an anti-Islamic approach to counter-terrorism set a tone for the administration. Now, his impending departure is the latest in a string of White House dismissals that seem to point to an administration in disarray, and in conflict between established conservatism and divergent voices.