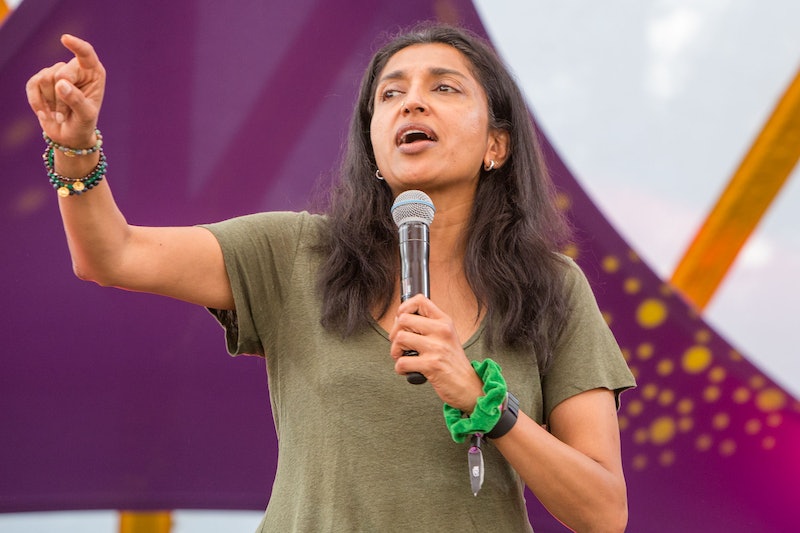 There's more and more female comedians these days. Which is just about the best thing I've ever been able to open up an article with. You know why? Because up until the last few years comedy has sadly been a bit of a boys' club. Yep, no room at the table for all those hilarious, funny, talented women we know and love. But now it's 2019 and here come the women. And whether it's stage or screen, comedians like Sindhu Vee are taking over. So who is Sindhu Vee? Because this game-changing talent deserves all of the attention in the world right now.

Vee is super hilarious comedian who has become known for appearing on hit shows like Live At The Apollo, QI, Have I Got News for You, and her Radio 4 show Sindhustan.

When you think of comedians you might think of drama students, or maybe students of the arts. Shlepping their way to the top. Vee has had a very different route to the top and it's all been, well, exceptional.

Yes, this high achiever is not only goals for comedy, but for academia, high flying careers, and family life. Not too bad, hey?

According to her website, Vee was born in India and spent her childhood in the Philippines, Lucknow, and Delhi. A bright youngster from the get go, she went on to study in Delhi, Oxford, Montreal, and Chicago. After a pretty brilliant few years getting her noggin to top notch standards she did what a lot of brain boxes do, went into finance. She became a high-flying bonds tradeswoman in London's competitive financial industry. She married a Danish man and they had three children. After her third child, she decided that she wanted to become a stay at home mum for a bit. Something which as she revealed to the Evening Standard, didn't quite suit her.

"But leaving [the financial industry] wasn't very easy. I cracked up. I went bananas. I was at a low point. I didn't want to be a banker but I didn’t recognise that I had a loss of identity. I felt a massive loss. Where is my space? It used to be Canary Wharf, university," she said.

Feeling lost at the time, a chance email changed it all. As she told the Evening Standard notes, “I got an email from someone who said she was doing stand-up and she was one of the least funny people I knew.” She thought to herself — woah, I can do this. So she took to the stage. That was in 2012 and she hasn't looked back since.

Vee is clear that she's always put 100 percent of herself into everything she's done. Academia, banking, family life. And comedy has been no different. Especially in comparison to banking. "Both jobs are competitive. When you meet a client you have to gauge them and reading an audience is the same. And you have to have a thick skin in both," she told the Evening Standard.

If you want to see this champion of comedy, girl power, and the LOLs check her out on this season of QI.

More like this
Alan Carr's 'Changing Ends' Is A Witty Sitcom Based On His Own Life
By Darshita Goyal
This Pre-'Love Island' Video Of Olivia & Zara Together Changes Everything
By Bustle UK
Prince Harry & Meghan Markle Are Puppets Now
By Sam Ramsden
David Schwimmer & Gemma Collins Join 'Celeb Bake Off' & Twitter Can't Cope
By Sam Ramsden
Get The Very Best Of Bustle/UK
Sign up for Bustle UK's twice-weekly newsletter, featuring the latest must-watch TV, moving personal stories, and expert advice on the hottest viral buys.