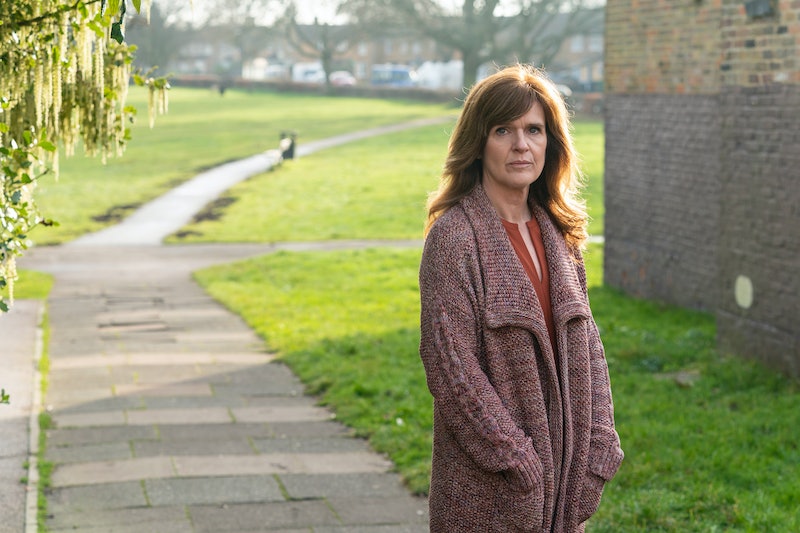 ITV's A Confession features a pretty star-studded cast, including Martin Freeman, Imelda Staunton, and Siobhan Finneran. The latter you may recognise from just a few series on the telly, like Benidorm, Downton Abbey and Happy Valley. While you may have become pretty familiar with the actor through her roles in these TV game-changers, you probably don't know a whole lot regarding how she got into acting in the first place. So who is Siobhan Finneran, and what spurred her on to become an actor?

Born in Oldham, Lancashire, Finneran's love for performing came to fruition through one of Britain's comedy greats. "As a little girl I wanted to be Eric Morecambe," she told the Telegraph. "Not to be like him but to actually be him." Holding on to that adorable dream, she studied theatre studies which then led her to play Rita in the 1987 comedy Rita, Sue and Bob Too. "I was terrified all the way through it," she admitted during an interview with Waitrose Weekend in 2017.

"I didn't have any clue what I was doing. I didn't realise what a name and what a man Alan [Clarke] was. It was my first job — I'd never been in front of a camera before. I had to learn every day. It was really daunting."

The actor then went on to appear on Coronation Street, Heartbeat, and Emmerdale before starring in Benidorm as Janice Garvey.

"I tend to prefer whatever job I'm not doing. Theatre or film or telly," she said. "It's such a wonderful business to be in that I think deep down most of us are waiting for someone to come up and tap us on the shoulder and whisper, 'Right, you've had your fun but it's time to go, you're just not good enough.'"

Well, that certainly hasn't been the case for Finneran. Since her leading role on Benidorm, the actor has become a regular face on telly thanks to the likes of Downton Abbey and Happy Valley, both of which have garnered her a significant amount of praise and attention. But despite being known across the world thanks to these roles — especially Downton — that part of her job hasn't really phased her. "It's not something I've really thought about," she told Waitrose Weekend.

"I think [Downton Abbey] became this monumental beast, internationally, the year I finished. I know the rest of the cast, who I'm still in touch with, have been over to American and they all get mobbed, but I've never had that. I tend to kind of skulk around a bit — I'm not sort of 'Here I am!' And thankfully I don't really look like Miss O'Brien, so people don't always recognise me."

Finneran will be taking on a drastically different role in ITV's A Confession, where she will be playing Elaine Pickford — the mother of missing Sian O'Callaghan. Speaking about playing a real person, Finneran told Bradford Zone: "You are playing a character and you can only go with what is written in the script when you're playing a part like that." She continued:

"My responsibility would be to not let them down. And for them to not have concerns over it. That the family feels this story was going to be in safe hands in terms of the production."