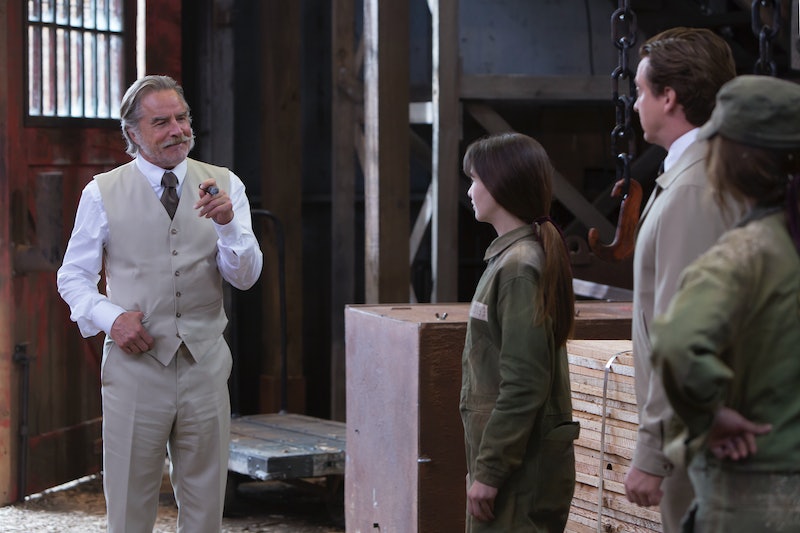 The 2004 film adaptation of Lemony Snicket's novel series covered the first three volumes. So, one of the exciting things about the Netflix adaptation is that it is bringing to life characters that have not been seen on screen before, such as Sir from A Series Of Unfortunate Events. He is the Baudelaire "guardian" in the fourth book, The Miserable Mill, and a mysterious one at that.

Played by actor Don Johnson, Sir owns Lucky Smells Lumbermill with his partner, Charles. In the Netflix series, it is made a bit more clear that the two are partners in a romantic sense as well as a business sense. This was only ever hinted at in the books.

Sir literally wrote the book on the mill's history, as Violet discovered in the understocked library. What the Netflix series does not show is that the mill's lumber is emerald green, and was used to build locations in ASOUE that include the Baudelaire and Quagmire mansions, as well as the Hotel Denouement. Not only is his face often obscured by a cloud of cigar smoke, Sir's full name is also unknown to the audience. It is, according to the books, too difficult to pronounce, though he may be called "Smogface Wiley" by some. The mill has terrible working conditions. Lucky Smells employees are fed gum for lunch and paid in coupons. On top of that, they are being hypnotized by Dr. Georgina Orwell into compliance.

It is unclear whether these practices were Sir's idea. It's possible that both he and Charles are under Dr. Orwell's spell as well. As Charles says in the Netflix series, Sir is grumpy because he had an unpleasant childhood. Does that justify his actions? I don't think so, but he's not the most nefarious figure in A Series Of Unfortunate Events by far.

Both Sir and Charles show up later in the book series, briefly, in The Penultimate Peril. They are attending a conference at the afore-mentioned Hotel Denouement. It is unknown how and why Lucky Smells ultimately closed. At least he and Charles are still together, which is something. Hopefully their relationship has grown into something healthier. The two of them are not hugely important in A Series Of Unfortunate Events, but always make an impression when they do show up.