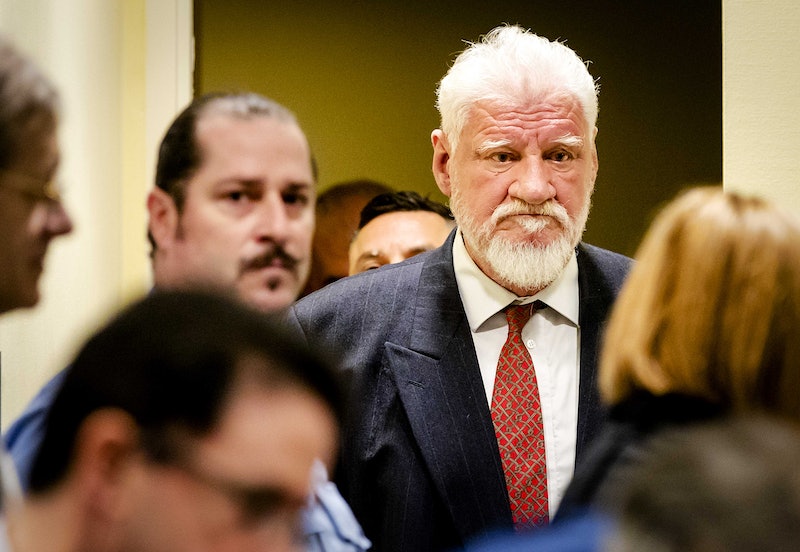 On Wednesday, at a trial that saw a Bosnian Croat general convicted for war crimes by the International Criminal Tribunal for the former Yugoslavia, that very same general drew international headlines. Even if your knowledge of the Bosnian war of the 1990s isn't quite what it could be, you should know who Slobodan Praljak is and why he poisoned himself at his trial.

Praljak, 72, was convicted by the tribunal of war crimes and sentenced to 20 years in prison on Wednesday; at his age, this would effectively be a life sentence. Praljak reportedly shouted defiantly that he was not a war criminal and gulped down a substance out of a small bottle.

He then revealed to the courtroom precisely what he'd done, acknowledging that he had poisoned himself upon learning he'd be sent to prison. "I have taken poison," the former general said, according to BBC News. The proceedings were immediately suspended and an ambulance was called to whisk Praljak to the hospital, where he ultimately died.

Praljak was reportedly one of six Bosnian Croat ex-military leaders sentenced to no less than 10 years in prison for their roles in the war, which lasted from 1992 to 1995.

Praljak was convicted of the murder of Muslim civilians during the war, in one of the final trials to be held, according to Al Jazeera, before the ICTY shuts down next month. Since being founded in 1993 to prosecute war crimes relating to the Bosnian war ― it was established, in other words, before the war had even concluded ― the ICTY has ultimately prosecuted 161 people, and has convicted 90 of them. Just 19 of the people prosecuted were acquitted, while dozens of others were redirected into other courts, or died prior to a verdict being reached.

Praljak himself served as a general in the Croatian army and the Croatian defense council from 1991 to 1995, having previously been a theater and TV director. He was not immediately charged with war crimes, however, but rather spent nine years after the conclusion of the war returning to the private sector as a businessman. It wasn't until 2004 that he was criminally charged, and voluntarily submitted to arrest. He pleaded not guilty to the charges, and has been moving through the war crimes tribunal process ever since, up until his conviction and apparent suicide on Wednesday.

The Bosnian war was a bloody and protracted conflict. An estimated 8,000 Muslim civilians were slain during the Srebrenica massacre, part of an ethnic cleansing campaign that amounted to the worst atrocity and humanitarian crisis in Europe since the end of World War II. In all, it's estimated that more than 100,000 Bosnian Muslims were slain in the conflict.

The Croatian government has not accepted the findings and rulings of the ICTY regarding the country's actions during the Bosnian war. As the Associated Press notes, the tribunal found that Croat military leaders had sought during the conflict to establish a mini-state within Bosnia.

In the immediate aftermath of Praljak's death, according to the AP, Croatian Prime Minister Andrej Plenković called the ICTY's interpretation of his country's involvement in the war "unacceptable." In fact, he sided with Praljak, saying his apparent suicide by poison spoke to a "deep moral injustice toward the Croatian people."

[Praljak's] act during the announcement of the verdict by the Appeals Chamber, when he took his own life, speaks the most of deep moral injustice towards the six Croats from Bosnia and Herzegovina and the Croatian people. The Croatian government once again expresses its dissatisfaction with the verdict to Jadranko Prlic, Bruno Stojic, General Slobodan Praljak, Milivoj Petkovic, Valentin Coric and Berislav Pusic.

Conversely, the tribunal has reportedly urged Croatia to accept its findings, saying that recognition and acceptance of its past actions is a necessary foundation for the reconciliation process. Whether that acknowledgement from the Croatian government ever occurs, however, remains to be seen.

More like this
Sarah Everard’s Killer Wayne Couzens Is Appealing His Whole-Life Sentence
By Sophie McEvoy
Don Crowder Successfully Defended Candy Montgomery, But His Story Ended In Tragedy
By Gretchen Smail
Where Is Dr. Cline Now?
By Morgan Leigh Davies
The True Story Of Candy Montgomery From Hulu’s True Crime Series
By Radhika Menon
Get Even More From Bustle — Sign Up For The Newsletter