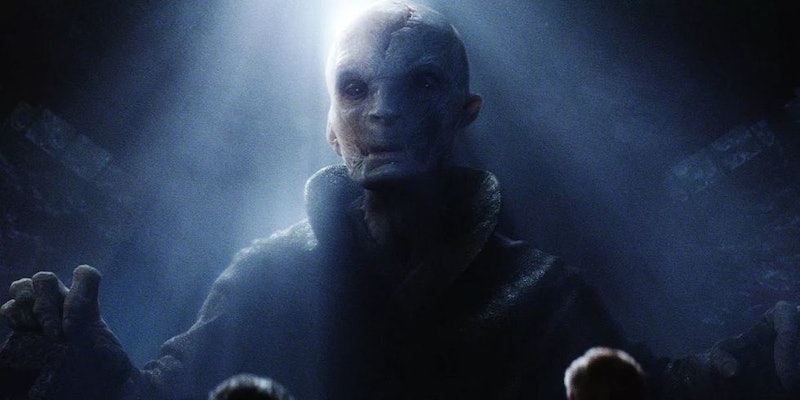 Spoilers ahead for Star Wars: The Last Jedi. When audiences walked out of Star Wars: The Force Awakens in December 2015, they were left with a multitude of huge questions. From the identity of Rey's parents to whether Finn and Poe would ever get together, the first movie in the new trilogy left many important mysteries unsolved. One of the most pressing questions of all was the identity of the villainous leader Snoke, who many fans thought might really be Darth Plagueis, Palpatine, or some other evil character hidden in disguise. Now that the next movie in the series is here, viewers thought they might finally get an answer — but as it turns out, The Last Jedi doesn't reveal who Snoke is, despite all the fanfare around the mysterious figure.

What the Rian Johnson-directed movie does do with Snoke is seriously shocking, though. The villain is seen in several scenes throughout The Last Jedi, giving orders and criticisms to his underlings, including both Kylo Ren and General Hux (who's clearly both terrified and reverent of his supreme leader). But his big moment comes a little past midway through The Last Jedi, when Rey and Kylo Ren appear in front of Snoke. Snoke tells the duo that he's the one who set up their mind communication, knowing that they wouldn't be able to resist using it and that it'd lure Rey in. After Rey tries and fails to attack Snoke, the leader orders Kylo to kill Rey, and for a long moment, it seems that that's exactly what Kylo is about to do.

Except — he doesn't. Instead, Kylo makes the lightsaber sitting right next to Snoke slice the character in half, killing him instantly. It's a heart-stopping moment, and for a bit, it looks like Rey is just as stunned as audiences are that Kylo actually did that. But there's no time to process, as, just a few moments later, Kylo and Rey find themselves having to fight off all the Stormtroopers who were standing by to protect Snoke and make sure that their captives didn't escape. One by one, though, the First Order members go down, and Kylo and Rey come out both relatively unscathed and in awe of what they've just accomplished together.

Things escalate quickly from there, with Kylo beckoning Rey to join him and her refusing, but let's focus on what happened to Snoke. The dude's identity has been hyped up for years, but instead of giving us any answer, the filmmakers decided to just... kill him. With one quick lightsaber thrust, Snoke is a goner, and it becomes apparent that unless some new piece of information comes out in Star Wars: Episode IX, his identity will forever remain a mystery.

And while that may be frustrating to fans, that's apparently exactly what writer/director Johnson wanted to happen. Entertainment Weekly reports that earlier in 2017, Johnson said, "Similar to Rey's parentage, Snoke is here to serve a function in the story. And a story is not a Wikipedia page. For example, in the original trilogy, we didn't know anything about the Emperor except what Luke knew about him, that he's the evil guy behind Vader. Then in the prequels, you knew everything about Palpatine because his rise to power was the story. [In The Last Jedi], we'll learn exactly as much about Snoke as we need to."

In other words, all we needed to know, apparently, is that Snoke was a Big Bad who was in Kylo Ren's way and thus didn't make it out alive. Not exactly what fans might've expected, but hey, that's Star Wars for you, always full of surprises and twists.