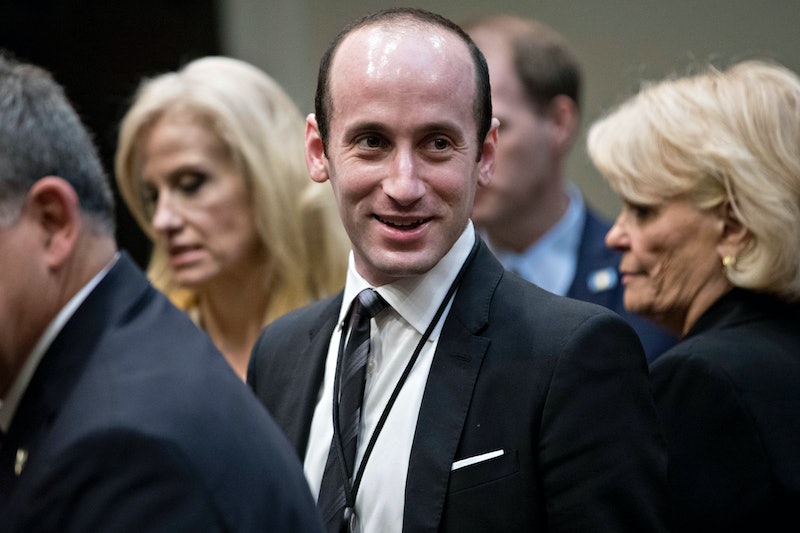 From his travel ban to his push to repeal Obamacare, Donald Trump has taken more than a few shocking actions since assuming the presidency in January. But he hasn't done so alone. Trump has a number of advisors in his corner, and following a weekend of talking to the press, one in particular is receiving more and more of the spotlight: Stephen Miller. And he is drawing criticism for his appearance on CBS's Face the Nation, where he declared that "the powers of the president to protect our country are very substantial and will not be questioned." The undemocratic sentiment of the statement is troubling, indeed. But exactly who is Stephen Miller?

The 31-year-old Santa Monica native serves as senior White House policy advisor, and is part of the team that developed many of Trump's executive orders, including the immigration/travel ban. And while his current role is his most high-profile one to date, he's already an established figure in American conservatism.

Miller first came to attention while still a political science student at Duke University. There, he publicly wrote in defense of the lacrosse players accused of rape in 2006 (they were eventually cleared of charges), penning a column for The Duke Chronicle that read in part: "And not only have many already convicted the lacrosse players, but they have also diffused that conviction across the entire team. Being a white, male lacrosse player was all it took." His official political career outside of college began after he graduated and worked as a press secretary to Republican representatives Michelle Bachmann and John Shadegg.

It was Miller's work fighting Obama's immigration reform efforts as an aide to then-Senator, now-Attorney-General Jeff Sessions that set him on the path to the White House. Once campaigns ramped up for the 2016 election, Miller turned his attention to helping Trump get elected. He spoke at campaign rallies, and even wrote Trump's Republican National Convention keynote speech.

Now, as a policy advisor, Miller is tasked with recommending, proposing, and writing Trump administration policies. And as Trump's executive orders show, immigration restriction is at the top of his list of priorities, helped by his congressional work with Sessions. As the legal battle over the immigration ban and debate over religious discrimination continues, Miller will no doubt appear on America's TV screens more and more often to explain and support the administration's controversial positions.

His real work, however, is away from the cameras. The New York Times reports that he is currently at work on "an as-yet-uncirculated rewriting of the guest worker program that is likely to impose new restrictions on the cheap foreign labor." But as far as debate over that, the immigration order, and any other orders that may come up for consideration, Miller has made clear that he doesn't think Trump should be questioned. Now that's unsettling.