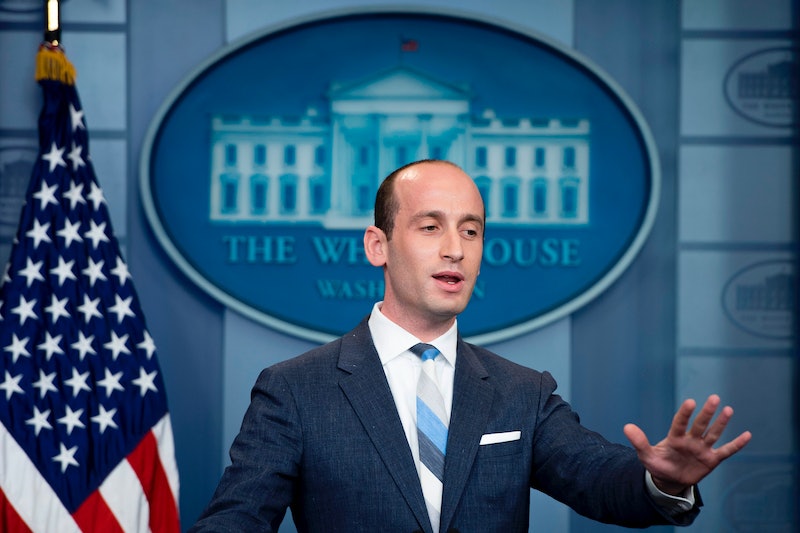 Stephen Miller, Trump's young far-right advisor in the White House, has a history of holding some controversial, provocative ideas. You may know about the xenophobic immigration policies that he pushes, but he's also got a strong position on the relationship between the sexes. In high school, he wanted to prove men's superiority over women — so Miller jumped into a women's track meet race to show his physical dominance over the so-called weaker sex. And while there's no word on whether he won, the White House has confirmed that this episode did really happen.

According to a new profile from the New York Times, Miller's current employers didn't even try to deny this little tidbit of information, as they did to several other damning anecdotes about Miller's reported youthful escapades. Instead, the White House merely said that Miller had jumped into a women's team from a different school — as though it only would have been a bad thing if he had done it to his own school's women's team.

To be fair, this is a statement coming from a White House run by a man who was recorded bragging about having the ability to grab women without permission, so in comparison, this is really a relatively minor offense. But then again, that really just nails the point home — the president said that he didn't consider it a problem to kiss women without asking, and one of his closest advisors once thought it was appropriate to try and humiliate female athletes in the middle of a competition.

Miller's claim to fame is his hardline stance on immigration and the strength of his belief in what many claim is Trump's ideology: economic populism. Where Trump may waver on the specifics depending on what people respond well to, though, Miller does no such thing. In his very liberal high school, the New York Times reported, Miller often seemed to take unpopular, conservative positions just to rankle the people around him. He briefly worked with white supremacist leader Richard Spencer at Duke, though he now claims that he has no relationship with Spencer. He also insists that he doesn't agree with Spencer's neo-Nazi views about the biological superiority of some races. However, the immigration policies that Miller pushes certainly would further Spencer's goal of having a whiter America.

Miller, Trump's youngest senior policy advisor, would have you believe that somewhere, there's a line between espousing racist policy positions and actually being a white supremacist. Judging by his refusal to comment on the New York Times reporting and the White House's comment on the track meet situation, though, Miller isn't at all concerned about being labeled a sexist.

Maybe he didn't feel the need to dignify the story with a more specific response, or maybe he's just as secure in his belief that men are physically superior to women as he is in the belief that immigrants are the cause of most of America's problems. Men's muscles are, as Miller was probably trying to point out, generally stronger than women's — but the question of "physical superiority" is much more complicated than just who would win in a single race. But within an administration like Trump's, concerns about sexism don't appear to affect much. The cabinet is the most male that it's been in decades, and the laws protecting women's rights are falling off the books right and left. While Miller may be focused on immigration and the economy, maybe this story from his past provides a glimpse into how he feels about the Trump administration's position on women as well.