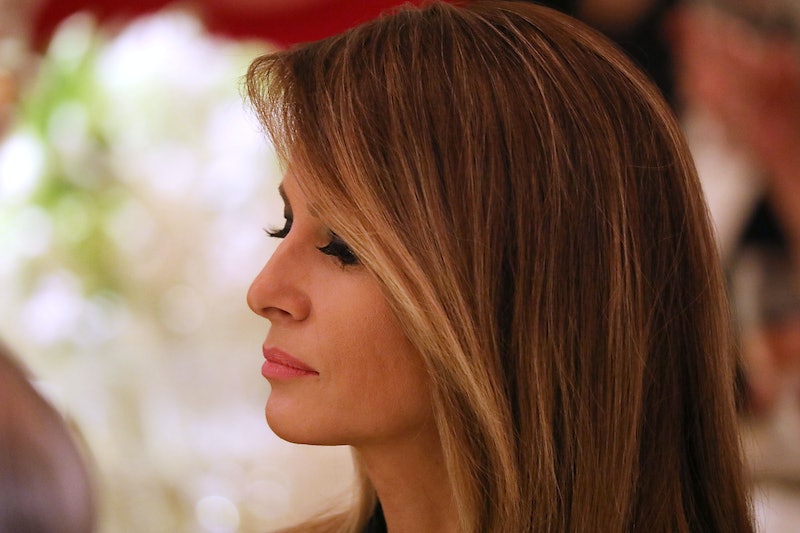 Donald Trump’s first speech before Congress brought an unprecedented level of pettiness to the hallowed halls of the Hill, primarily in the form of the guests both the White House and Congressional Democrats chose to invite. One guest of First Lady Melania Trump, Susan Oliver, had a specific political purpose for being there, as part of the president’s expected anti-immigration section of the speech. Although it is heart wrenching, Oliver’s story isn’t concrete proof of Trump’s past claims about undocumented immigrants, nor sufficient support for the xenophobic policies he has proposed.

In 2014, Oliver’s husband Sacramento County Sheriff's Deputy Danny Oliver was killed by an undocumented immigrant during a shooting spree. Oliver was a 15-year veteran of the department who, according to his wife, showed up to work an hour early every day, frequently answered emails from constituents, and volunteered to attend community meetings. He left behind his wife Susan and their two daughters. “I lost the man I was married to for 25 years,” Oliver said in a speech before Congress in 2015. “Each day I look for parental backup for rearing my child who is 12-years-old, and I feel that way.”

The circumstances of her husband’s death are undeniably tragic, but inviting Oliver is an exploitation of her story. While it’s true that undocumented immigrants do, on occasion, commit violent crimes, there’s no evidence that the rate at which that occurs is any higher than the general population of the United States. According to Immigration and Customs Enforcement, 177,960 “criminal aliens” were deported in 2014, but that number is misleading because of the terminology. The definition of “criminal alien” includes people who have simply been charged with a crime, even misdemeanors, no matter whether they’ve received their due process in investigating and prosecuting said charges. That inflates the number of immigrants who qualified for “criminal removal,” making it seem like immigrants are a much more dangerous group than they really are.

The idea that undocumented immigrants are responsible for some vague but significant percent of American homicides, which Trump seems to be perpetuating by inviting Oliver’s widow to the ceremony, is also statistically unfounded. According to the Department of Homeland Security, between the years of 2010 and 2014, only 121 people were charged with murder after having been previously held by immigration officials. That would make the murder rate among undocumented immigrants approximately .001 percent.Again, these statistics are somewhat unreliable because gathering any data on undocumented immigrants is difficult by nature. Trump’s campaign assertions that “thousands of Americans have been killed by illegal immigrants” could only possibly be true if it’s added up over decades, so it’s ultimately just fear-mongering.

Trump’s frequent attempts to manipulate both data and public perceptions are, at least, pretty transparent. The good thing is that his claims often withstand so little fact checking that his admittedly powerful emotional appeals are usually too weak to make an impact. While Oliver’s story should be told, it shouldn’t be misrepresented or used to trick people either. Trump is using Oliver for his own personal gain, but it won't work if everyone knows the real story.

More like this
'Brookside' Is Coming Back & Soap Opera Fans Are Going Wild
By Sam Ramsden
Here’s Where The NHS Nurses’ Strike Currently Stands
By Sophie McEvoy
6 Organizations Fighting Police Brutality That You Can Support Right Now
By Syeda Khaula Saad and JR Thorpe
Kim Petras Just Made Grammy History
By Jake Viswanath
Get Even More From Bustle — Sign Up For The Newsletter
From hair trends to relationship advice, our daily newsletter has everything you need to sound like a person who’s on TikTok, even if you aren’t.