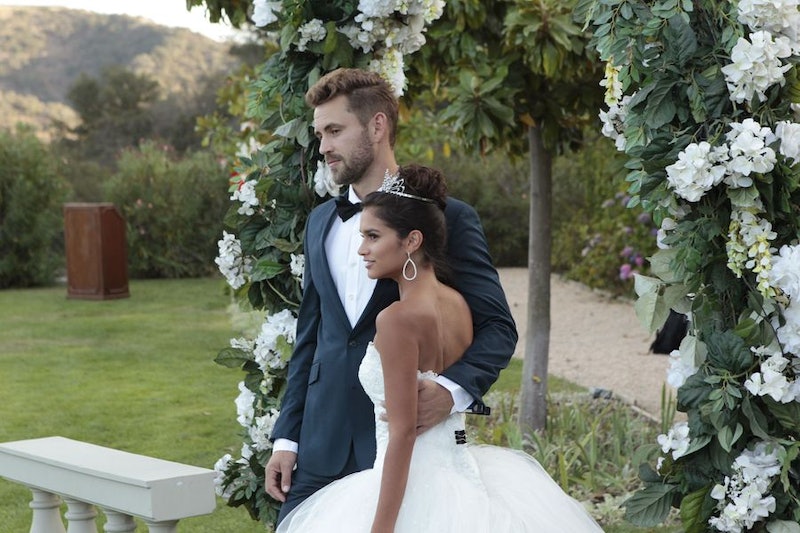 As ABC ups the number of women who compete on The Bachelor each season, it makes it hard for recappers and reviewers (and viewers, too) like me to keep up with them. It's especially hard to learn all 30 names when, like, half will be eliminated in the first two weeks, and the majority of the rest in the next three. But one of Nick Viall’s Bachelor ladies who has made an impression on me in Season 21 was Taylor Nolan, a 23-year-old mental health counselor from Seattle, Washington. This gal could go all the way. Who is Taylor Nolan from The Bachelor? Let’s take a look at her life.

Taylor is the youngest person in the cast, but she’s already accomplished so much. According to the Baltimore Sun, Taylor is a graduate of Stevenson University and Johns Hopkins University. Recently, Taylor opened her own practice, and she talks about it on her blog — she’s a Licensed Mental Health Counselor Associate (LMHCA) in Seattle at Counseling Ordinary Courage. Taylor says on her blog that she is "passionate about helping people help themselves — because what I don’t do is give people advice, or try to help people who aren’t ready to be helped.”

Striking out on your own is a huge deal, and in a blog post, Taylor talked about how proud she was of herself for following her dream and going for her own thing. “I can't believe I'm saying this but I officially have my own private practice,” she said. “I often find myself minimizing these events in my life but I realize it is actually okay to be proud of yourself. And I am proud of myself for starting this new chapter.”

First of all, can I get a hell yeah for her realizing that she shouldn’t minimize the big accomplishments in life? All too often women especially tend to minimize their accomplishments as the other shoe dropping or as dumb luck, and that’s silly — she (and me and all other women) worked hard for what she wanted, and she got it. Taylor says that she was raised by a single mom, and she was the first person in her family to go to college — she knew what she wanted and she's crushing it.

She's not only a mental health counselor, though. According to her blog, she’s done some modeling, and she’s a big proponent of volunteering in her local community. She loves cats and organic farmers markets, so I’m thinking that she and I could definitely hang out on a weekend with some good lattes checking out the rainbow carrots.

Taylor is also biracial, and she touched on that a little bit on The Bachelor. She said in her first talking head that she was always treated as though she wasn’t white enough for the white girls or black enough for the black girls, which was something she struggled with for years. This is one of the most diverse casts of The Bachelor ever, so it would be interesting to hear Taylor talk more about herself and her upbringing with the other women — hers is a point of view that has been sorely lacking on The Bachelor in the past.

As for the rest of her life, it seems like Taylor has a passion for rollerblading around Seattle (there are plenty of pictures on her Instagram of her ready to roll) and hanging out with her friends, like any other 23-year-old. Reality television show contestants — they’re just like us!

Taylor seems like a cool person, and I wonder how her mental health training will come into play on The Bachelor. I’m sure that Taylor knows how to recognize strange behaviors and disarm antagonists pretty easily, so will this stop her from getting into the contestant arguments that The Bachelor so often devolves into? It'll be interesting to see. Taylor is smart and successful, and I think this all will keep her in Nick’s eye as the weeks go by.