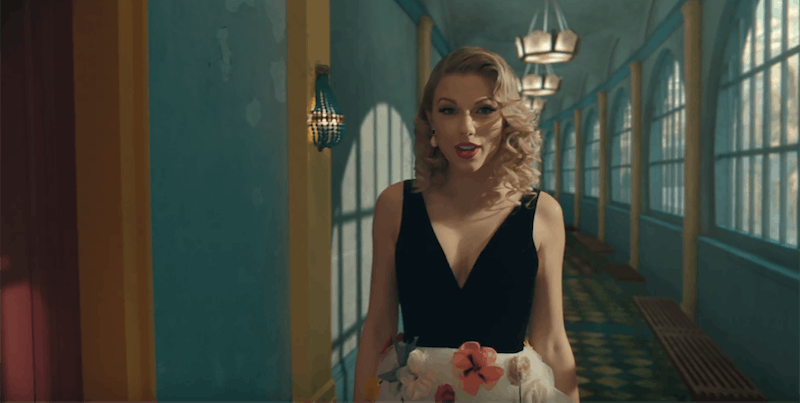 The time has finally come: Taylor Swift's new song "ME!" featuring Brendon Urie of Panic! At The Disco arrived at midnight with a music video on Friday, April 26. Though usually fans speculate who or what her songs are about, this time, it sounds like Swift's new single is about just being yourself. A few hours before the song's midnight release, Swift appeared at the NFL Draft in Nashville, Tennessee. In an interview with Good Morning America anchor Robin Roberts, Swift shed some light on the song's meaning:

"‘ME!’ is a song about embracing your individuality and really celebrating it, and owning it. I think that with a pop song, we have the ability to get a melody stuck in people’s heads, and I want it to be one that makes them feel better about themselves."

In the song and music video, Swift and Urie play a couple who is having an argument (in French) in a bright, pastel-colored world, but the lyrics show both of them embracing their uniqueness and their love for each other. They sing throughout the bright and colorful world and look like they're having the best time.

In the chorus, Swift and Urie take turns singing — and even sing the following together at some points in the song:

But one of these things is not like the others

Baby doll, when it comes to a lover

I promise that you'll never find another like me!

I'm the only one of me

Baby, that's the fun of me

You're the only one of you

Baby, that's the fun of you

And I promise that nobody's gonna love you like me

Perhaps if the song is about anyone in particular, it could have been written about Swift's boyfriend Joe Alwyn. Several fans on Twitter speculated that the song could be about Alwyn, in addition to it being a track that encourages everyone to embrace their own individuality.

Many fans on Twitter noticed that the music video might be set in London, which they felt was a reference to Alwyn's home city.

Swift has recently said that her music is a way that she processes her the things that have happened in her life. During an appearance at the Time 100 Gala in New York City on April 23, Swift told the audience that songwriting is "the main pillar of my sanity" and a "protective armor," according to USA Today.

"Because you think of writing about your life, that's usually like a vulnerability. But I think that when you write about your life, it gives you the ability to process your life. I use it as a way of justifying things that have happened to me. Whether they're good or bad. I like to honor the good times and really process the bad times when I write."

It sounds like "ME!" is doing just that — honoring the good times, and loving everyone for who they are as individuals.