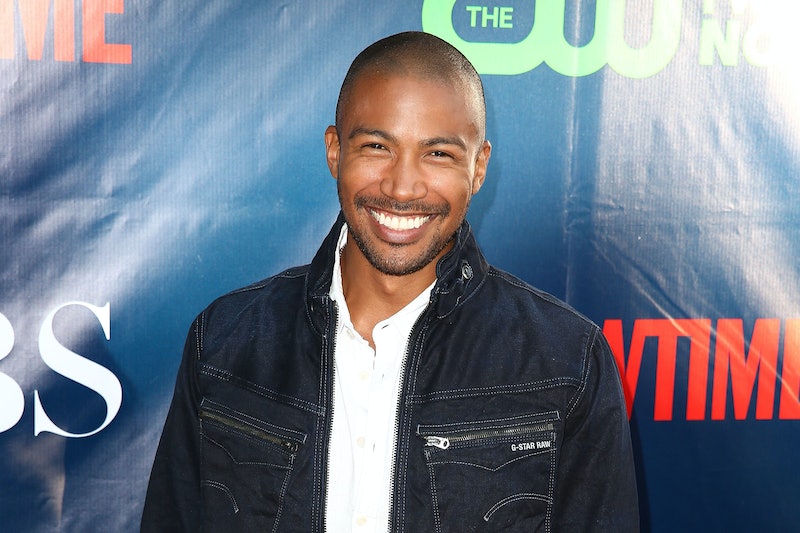 For The People Season 2, Episode 1 spoilers ahead. New Ted is not the same as the Old Ted on For The People, and he's coming in hot as a love interest for Sandra Bell. Fans were introduced to Charles Michael Davis' For The People character Ted in the Season 2 premiere, and he instantly made an impression on viewers and on Sandra. She's usually pretty "uptight" (in actor Britt Robertson's own words), and Ted is more relaxed, which makes them perfect for an opposites attract situation. And there are already clues building that Ted and Sandra will date in For The People Season 2.

Sandra was initially dismissive of Ted because their old investigator was also named Ted and she found that confusing. New Ted responded with a quick, "No, it's actually not that confusing. You just need to remember that your investigator's name is Ted." He's all charm, but he gets his work done too — which is something Sandra can certainly appreciate. When she initially scoffed at what his investigative work turned up on a case, Ted made it clear he's not here to play around.

He told her that if he was in her situation, "I would think that [Ted's research] would be helpful information to have, and I would say, 'Wow, Ted. This is great. How did you turn this up so quickly?' And you would say, "Aw, shucks. Just doing my job.' You're me in this scenario," he says to Sandra. She looked a little taken aback, but also impressed that he's a quick thinker and prides himself on his work.

This playful work banter is almost certainly a sign of things to come this season, which seems to be building to Sandra's first real romantic storyline. It's about time, now that we've seen what that might look like.

When asked by ABC7 New York reporter Jennifer Matarese if they would be playing love interests, Robertson played coy but Davis answered, "Possibly." But Robertson did speak at length about how their characters' opposite personalities actually balance one another out.

"We have a good dynamic, I think, for the show because we're real like opposites that could attract in moments," she told ABC7. "But first I think it's a little bit like we're butting heads. He's new, I don't want much to do with anything new, I'm very focused. But he's just so sweet, and look at that smile — when he smiles and the eyes and stuff — wins everybody over."

So it appears that Sandra may indeed be won over by Ted's charms at some point. Davis also said in a promotional video on the ABC press site that most of his scenes are with Robertson, which further hints that their characters could get together. And he had nothing but praise for Robertson's work, so it seems they have a real life friendship to draw on when playing these characters and honing in on a possible relationship.

"[Robertson's] so charming, you just want to like get her address and send her a Christmas card," Davis said in another promotional video. "She's great. She's very professional ... very relatable and charming. Anyone who wakes up and drinks Mountain Dew and eats a lot of bacon for breakfast in LA, you're cool with me."

And soon it seems Sandra and Ted will be cool with each other as well.