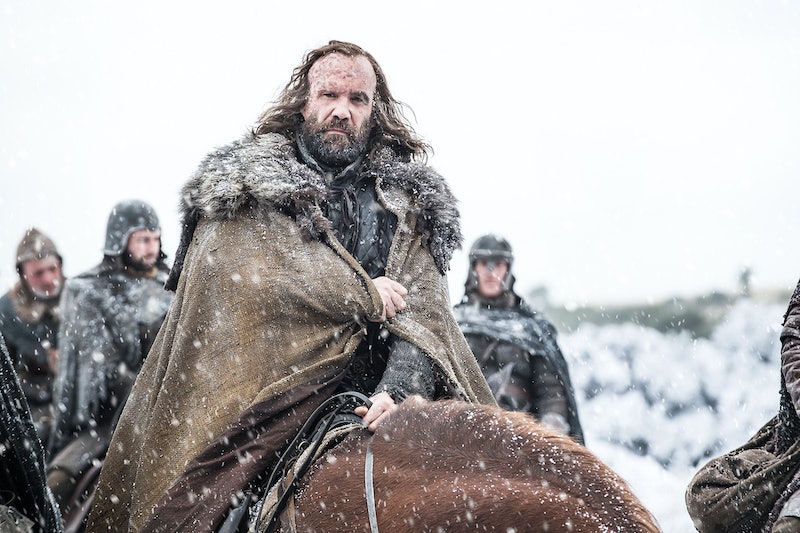 Winter is freaking here, people, and it's brought with it a ton of new photos from Game of Thrones Season 7. Strap in, y'all, it's about to go down, starting with an intriguing new Season 7 photo of a man on horseback sporting an eyepatch. He definitely looks familiar, but with a bushy beard and snow swirling around him, it might be tough to see that it's actually a supporting Game of Thrones character: Beric Dondarrion.

That Beric is returning for Season 7 is very interesting indeed. Judging from the snowy setting of the photo, Beric will be reintroduced to Game of Thrones audiences when we also rejoin The Hound as they — most likely — journey North. In some of the first Season 7 photos, The Hound was also shown riding a horse in a snowy environment, so it makes sense. Furthermore, the last time we saw Beric, it was in Season 6 and he was reconvening with The Hound when the latter came upon Beric and the men of The Brotherhood Without Banners attempting to hang Lem, the man who killed The Hound's mentor, Brother Ray.

Back in Season 6, Beric offered The Hound a place in The Brotherhood as a way of giving him a sense of belonging. It was during their riverside discussion that Beric mentioned that he wanted to ride North, making mention of some cold winds rising up. This is clearly an allusion to the fact that the impending White Walkers attack looms in the near future as well as the fact that winter has indeed arrived in Westeros.

Beric's return North with mean big things where the Starks are concerned. In Season 1, Beric was dispatched by Ned Stark, former Hand of the King, to take care of Gregor Clegane while he was still acting like an atrocious human in the Riverlands (Gregor's always been atrocious, but you get it). While Beric's appeared infrequently since Season 1, his return North in Season 7 — well traveled, seemingly impervious to death, and bringing with him a large group of men — could mean that Jon Snow gets some much-needed backup to assist him in some upcoming battles.

Welcome back, Beric. It's good to see you.