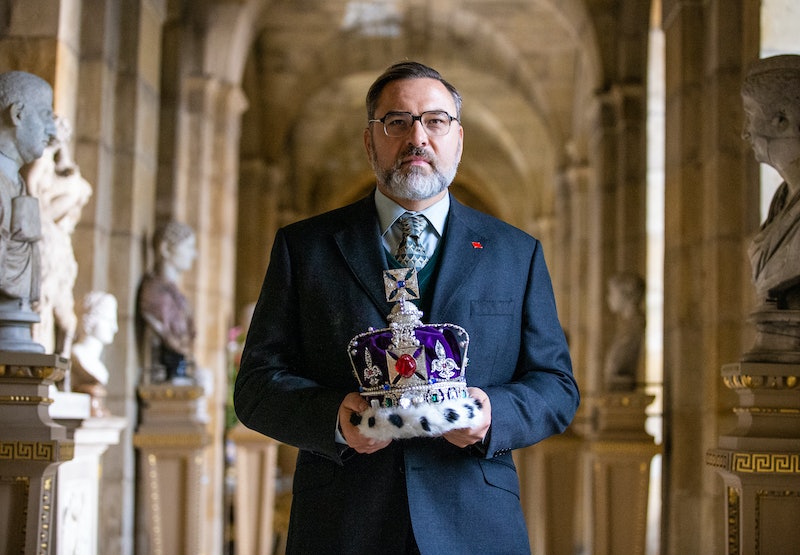 The upcoming Sky One comedy series The Queen and I is set to grace our screens over Christmas. The television adaptation tells the story of the royal family, who are forced abandon their lavish lifestyles after Britain votes to become a republic. The series stars David Walliams as the newly minted Prime Minister, Jack Barker, who is elected on the promise of abolishing the royal family. But who is The Queen and I's Jack Barker based on?

Well, the new Sky series is actually based on the 1992 novel of the same name, penned by author Sue Townsend. Although the character of Prime Minister Barker isn't said to be based on anyone specifically, it could be argued that the character has been formed by the author based on public opinion of the royal family at that time — which in the early 1990s, wasn't particularly favourable. However, one review by Brian Donaldson for The List does suggest that the author herself has a "soft spot" for the royal family, as The Queen and I story hints that the country may fall apart without them.

As previously reported, actor and comedian David Walliams, known for his work on Britain's Got Talent and BBC's Little Britain, plays the character of Jack Barker throughout the series. In an interview with the British Comedy Guide, the 47 year-old opened up about who the character could potentially be based on. He said:

"Well, I'm not Daniel Day-Lewis, but I did look specifically at interviews and speeches from one or two politicians. And I looked at Jeremy Corbyn quite a lot. He's probably the closest we have to a radical left-wing leader."

The actor also went on to describe his character, and revealed some details of the show. He added: "Well, I play a very left-wing leader of a political party called the Republican Party, and one of my election promises is to get rid of the monarchy. Even unexpectedly to me, I become prime minister, and then feel like I have to go through with it, even though it feels like a mistake. He's quite fun to play because he starts off very bolshie and confident and by the end of the piece he's sort of rolled up in a ball on the floor and he can't believe what he has done."

In the story, the royal family are forced to relocate to an estate in the north of England, and adjust to life as regular citizens after the dismantling of the royal institution. Although seemingly farfetched, Walliams was also asked how he thinks the British public would react if the story were to take place in reality. He said: "It's kind of complex, but probably, people who think they want it may well regret it. There's something very reassuring about someone being the heart and soul of the nation and someone being beyond politics. I saw the brilliant play The Audience, about all the different prime ministers she'd had over the years, and you think, there's something really reassuring about someone being there the whole time. So, I think you would miss it."

This article was originally published on Dec. 21, 2018