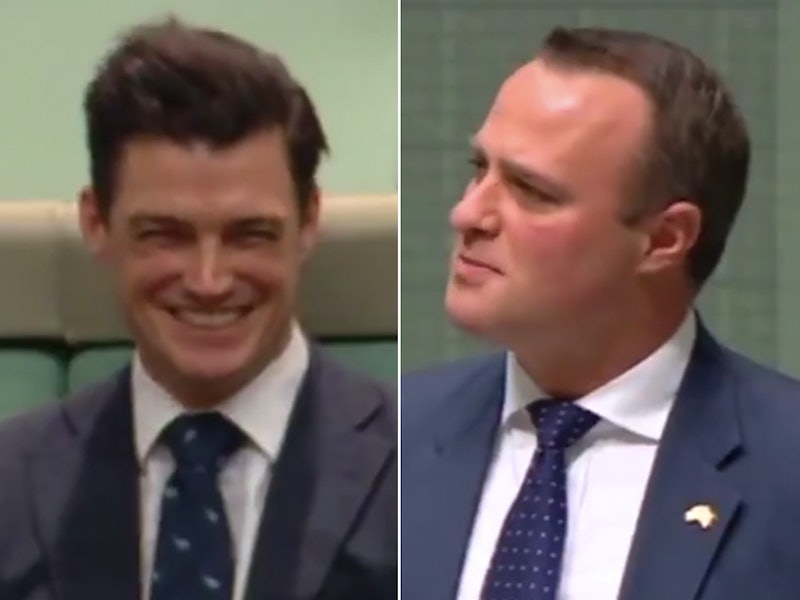 In the midst of debate over a bill that, if passed, would make history in Australia, one lawmaker stood up in Parliament to ask one final question: Will you marry me? Tim Wilson, an openly gay member of Australia's Parliament proposed to his long-term partner Monday during the governing body's final debate on legislation aimed at legalizing same-sex marriage.

"This debate has been the soundtrack to our relationship," 37-year-old Wilson said in a speech delivered Monday on the floor of Australia's House of Representatives. He went on to speak briefly of the struggles he and his partner had weathered over the course of their relationship. "In my first speech, I defined our bond by the ring that sits on both of our left hands. They are the answer to the question we cannot ask," an emotional Wilson said. "So there's only one thing left to do. Ryan Patrick Bolger, will you marry me?"

An enthusiastic "yes" came from the public gallery where Bolger sat as the chamber erupted in cheers and applause.

Deputy Speaker of the House Rob Mitchell directed that Bolger's response be recorded in the Hansard, an official report of Parliament's proceedings. "I should let Hansard note to record that that was a 'yes' — a resounding yes," Mitchell said, before congratulating the couple. According to Australia's House of Representative, Wilson appears to be the first lawmaker to ever propose from the floor of the House.

Earlier in the speech he gave on the House floor, Wilson criticized other lawmakers in his own Liberal Party who had insisted on putting the issue of same-sex marriage to a popular vote earlier this year. He urged them and the Liberal Party as a whole to "reflect on this debate and learn from it."

Wilson also shared how he had struggled with questions and doubts about his sexuality while growing up and his eventual decision to not "give in" to the stigma he felt existed around being gay. "This bill rams a stake into the heart of that stigma and its legacy," the lawmaker said. He then spoke of his long-time support for legalizing same-sex marriage, saying such legislation would make gay, lesbian, bisexual, transgender and intersex people in Australia "full citizens for the first time."

In a tweet posted Monday, Bolger said the proposal "was a surprise."

While the couple had reportedly considered themselves to be engaged for the last nine years, Wilson's proposal on Monday could soon be followed by a real wedding as Australia prepares to pass legislation to legalize same-sex marriage in the country. A bill to legalize gay marriage gained support and momentum in Australia in mid-November when a majority of the country voted in favor of it in a non-binding referendum. According to the New York Times, more than 61 percent of the 12.7 million Australians who voted in the referendum voted in favor of legalizing same-sex marriage while just 38.4 percent voted against it.

Following the referendum, the bill easily passed through Australia's Senate last Wednesday with no amendments being made. The bill is expected to pass through the House in Parliament's final vote on the issue sometime before the end of this week.

In a statement to ABC Radio National's RN Drive, Wilson refuted claims he'd proposed in Parliament as a means of gaining international attention. "It was about honoring Ryan and his pathway through this journey with me, and in many ways to say to the thousands of Australian couples out there in a like situation that this is what it means and it's OK, you can go ahead now," Wilson said.