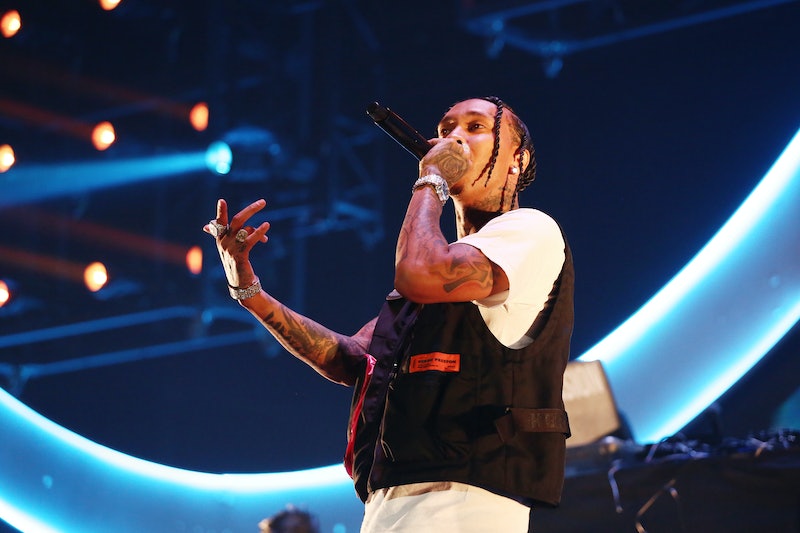 Tyga's profile has been rising in the past couple of years, thanks to the success of singles like "Taste" and "Go Loko" and a lead role in VH1's Scream: Resurrection, but his career is still overshadowed in some ways to his three-year relationship with Kylie Jenner. No one knows with any certainty who, if anyone, Tyga is dating in 2019, although some fans suspect that Tyga has a new partner by his side.

Early in 2019, The Daily Mail reported that Tyga had been seen with model Tammy Hebrow during his tour in Australia, a rumor that Hebrow's sister denounced. Amy Hebrow told Daily Mail that, "Tammy had backstage passes with a couple of friends for the festival. We were all invited, everyone is just friends and we're having fun dancing at a festival. This has just been taken out of context." The Daily Mail later reported that Tyga had been seen with a still unidentified "mystery woman" in May of 2019.

Tyga recently appeared on Good Morning Britain where he was asked multiple questions about his relationship with Jenner. At first he seemed willing to play along, explaining that, per Cosmopolitan, "You date, you move on, you date again, you move on. It’s just a part of life, it’s part of evolving. It’s just learning. There's no preparation, you just have to learn from mistakes and grow better." While Tyga was more than happy to answer the first question he received regarding Jenner, he was less pleased when the show's hosts continued to push the topic.

"I don’t want to talk too much about it. Do you know what I’m saying?" he eventually expressed, and it's not hard to see why. It's been two years since breakup with Jenner, and it appears as though people may never stop asking Tyga questions about what it was like to date Kylie Jenner or try to discover who he is dating now that he is no longer dating Kylie Jenner.

Although Tyga has been defined in many ways by his relationship with Jenner, he has plenty of his own projects to talk about. Between the release of his album Legendary, declaring himself the "Lightskin Lil' Wayne" and his starring role in Scream: Resurrection, Tyga is showing the world that he's much more than just Kylie Jenner's ex.

More like this
Who Is Allison Williams Dating After Her Divorce? She’s Engaged With A Child
By Jake Viswanath
Who Is Pete Davidson Dating? He & Chase Sui Wonders Got Caught Kissing
By Jake Viswanath
Who Is Dorothy Wang Dating After The 'Bling Empire: New York'?
By Karen Fratti
Laura Anderson Pulled The Ultimate Girl Power After Her Break-Up
By El Hunt and Megan C. Hills
Get Even More From Bustle — Sign Up For The Newsletter
From hair trends to relationship advice, our daily newsletter has everything you need to sound like a person who’s on TikTok, even if you aren’t.