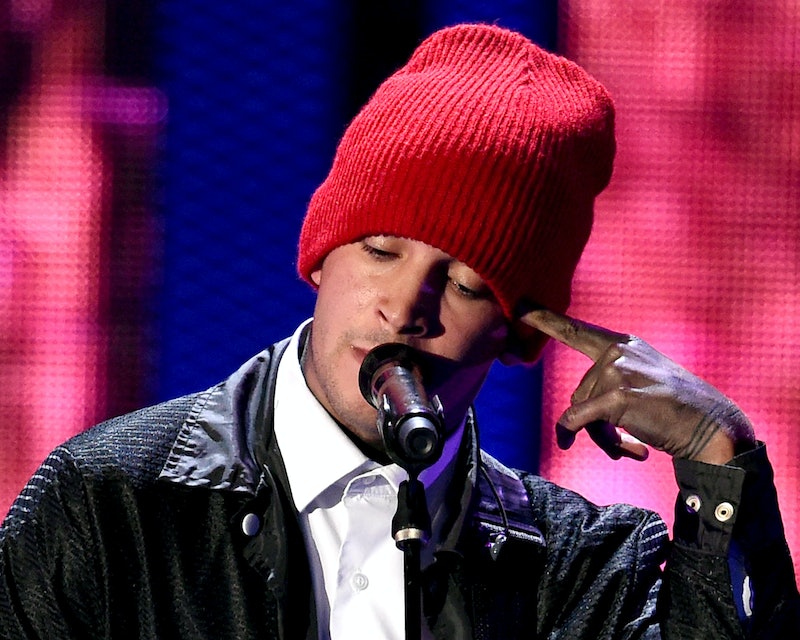 Well, folks, it's that time of year again. Yep, that's right, the Grammys are upon us, and it's shaping up to be one hell of a show. James Corden is hosting, Beyoncé may be performing, and pretty much everyone will be there, including breakout rap-rock duo Twenty One Pilots. But as the pair heads into their first night as Grammy-nominated artists, you might be realizing you don't actually know that much about them. Like, for instance, who is Tyler Joseph's wife? Did you even know that he's married?

That's OK. It hasn't been that long. You know, only about two years, but who's counting? Anywho, her name is Jenna Black. Joseph, who serves as the group's lead vocalist, got married to Black in March 2015. In an interview with Rolling Stone last year, he said they met in a pretty average scenario: She was the sister-in-law of a guy he went to high school with. Now they live together in his hometown of Columbus, Ohio. "It's been fun getting to know each other even better while traveling the world," he told the publication of her joining him on tour. "I like the idea [that] she’s going to be around for this craziness that’s happening."

In an AMA on Reddit, Joseph also revealed the first thing that attracted him to her was "how unimpressed she was" with him. "For some reason, I couldn't get enough of that. First pickup line, my voice cracked," he wrote.

Beyond that, there's not much about her that's publicly available, aside from the fact that Black really loves donuts, according to her Twitter bio (which, same.) But what is clear is that the Josephs are very much in love.

First of All, He Proposed In Paris

Ahh, the city of love.

He Also Brings Her Out On Stage Sometimes

And He Posts Adorable Instagrams

"I have hundreds of photos like this on my phone because every time we sit down to eat somewhere I think to myself, 'I can't not take a picture of her." I think she looks pretty here but even as I type this she is laying next to me sleeping with her mouth open, she's even prettier. She is my most prized-possession. One year of marriage down fifty-three to go. Happy anniversary, love."

Look at those smiles.

The definition of "I can't."

Joseph and his professional half, Josh Dun, are up for five awards at the Grammys on Sunday, Feb. 12. Here's to hoping they'll all have something to celebrate.