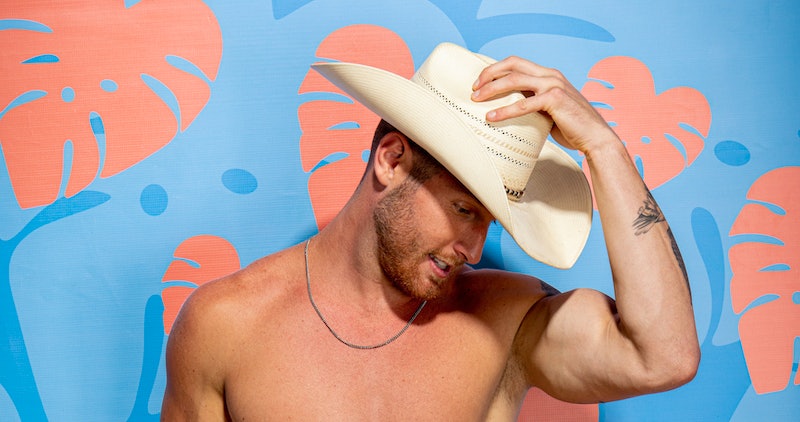 "I'm just a cowboy trying to find my angel on an island." That's a CBS video bio quote from Love Island contestant Weston Richey. The 25-year-old is one of several singles trying to find love (and win money) on the CBS version of the hit UK show. Cash is technically a prize for the winning couple on the show, but Weston didn't mention anything about that in any CBS video promos. He's all about making it seem like he really is there for love alone. (Maybe he is! Who knows!)

Weston is from Texas, which he really wants viewers to know based on the cowboy hat he showed up in for his CBS video bio. "Texas, that's all you need to know," he added in another CBS clip. He also really loves his country, and says, "When July comes around I dress USA for every day of the month." Aren't you glad it's July? If you don't see him in that outfit, though, expect plenty of denim on denim and cowboy hats based on his bio.

He also promised, "I know how to treat a woman," but then said in his video bio that when he sees attractive women he leads with a pick-up line. Dude. No. Weston's preferred pick-up line is, "Do you have a bandaid? 'Cause I scraped my knee when I fell for you."

After that brilliant pick-up line, Weston said he likes to go for this joke: "What did the pants say to the suspenders? What's up britches." Sure. Ok. That unfortunately doesn't seem like it will be the last dad joke we hear from Weston. According to his Instagram, he "has hundreds" more. Great.

It seems that pick-up line and then joke strategy hasn't really worked for Weston since he's still single. But, hey, now he gets to be on a TV show to try to find love. Weston said in his video bio he wouldn't be at all embarrassed to tell people he met his girlfriend on a dating show — he would prefer that to online dating, actually.

Outside of trying to find love, Weston has listed his occupation as photographer in his CBS bio. According to his website, he photographs food, fashion, fitness, lifestyle, and nightlife. He's also a videographer who will record your wedding, commercial, food, lifestyle, nightlife, or real estate.

But, wait! There's more. Weston said in his CBS bio that he's "just as good with a hammer as he is with a camera." Before he switched things up for photography, he worked in construction and even built his own home. Ok, dad jokes aside, that's pretty cool.

Weston also has a side hustle, because what reality show contestant doesn't? He's a male model, which one look at his Instagram page will reveal almost immediately. He's repped by the Neal Hamil Agency and his model profile does include some shots of him in just underwear and a cowboy hat. Because of course.

Look, everything about this guy sounds like he will make for great TV. Will he actually find love? He seems to think so. And perhaps he will. But first he should retire that pick-up line for good.