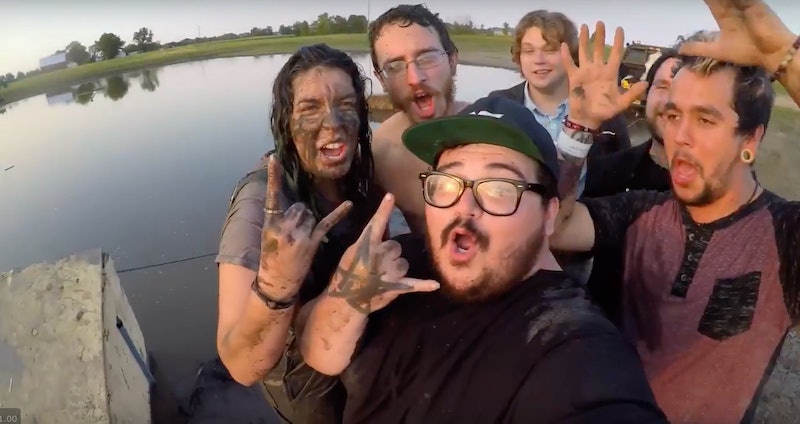 The beginning of every episode of Too Stupid To Die informs viewers that they should not try to recreate stunts that they witness Zach Holmes doing. Holmes, an amateur stunt performer out of Hobart, Indiana, is at the center of the new MTV stunt show Too Stupid To Die. The show is a symphony of self-mutilation in the style of classic MTV programming like Jackass or House Of Bam, but people who have been craving stunt shows in the vein may wonder who Zach Holmes is and why he's doing this to himself.

Holmes' answer for why he's dedicated to life to being battered with fluorescent light bulbs is simple, and in a way obvious — boredom. "Let’s face it. There’s not much going on in Indiana, so we wanted to make our own fun," Homes told the Chicago Tribune. "I definitely have a high threshold for pain. But things still hurt,” Holmes says, “At the end of the day, it’s all for comedic entertainment."

Zach Holmes has been a daredevil long before the premiere of Too Stupid To Die on MTV, and its almost hard to imagine what stunts Holmes could bring to television that he hasn't already horrified viewers with online. There may be no better way to understand Holmes than to look at some of his most hard-to-watch stunts.

In this clip, Zach Holmes wraps himself in straps of firecrackers and decides to light them, when he very well could've just not done that. The result is a lot of pain, a lot of smoke, and some blood from all of the explosions that happened on his skin. This may very well be the stunt that got Holmes a show, as it was noticed by original Jackass member Steve-O, who then shared it on his own Instagram feed.

This one explains itself pretty succinctly. Before Too Stupid To Die was on MTV, Zach Holmes made an appearance on the Comedy Central series Tosh.0, which was more than happy to donate their sizable budget to create new ways for Holmes to injure himself in quick succession.

Despite the many things that Zach Holmes has done to his own body, he's still in good-enough physical health to be at the center of Too Stupid To Die. Holmes' stunts may shock and disgust many, but if excessive mutilation is what it takes a get a television show with all of your friends, then maybe — just maybe — all the pain is worth it after all. It could also not be worth it and you shouldn't do any of his stunts at home, but that hasn't stopped Zach Holmes.