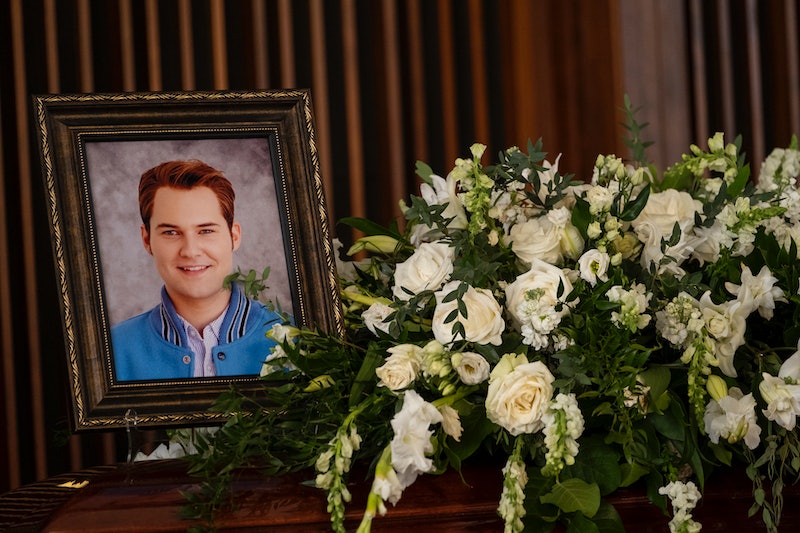 Major spoilers ahead for 13 Reasons Why Season 3. Though we do eventually learn who killed Bryce Walker on 13 Reasons Why, as with many things on the show, it's not a simple answer. Technically there's only one killer, but three people were at least partially responsible for his death. And it was more a heat-of-the-moment accident than a cold-blooded murder.

It all started at the homecoming game, where Bryce faced off against his old Liberty high teammates while playing for his new school, Hillcrest. Before the game, Chloe told him that she'd been pregnant with his child but had gotten an abortion, and that Zach had supported her through it. When a brawl later broke out on the field, a furious Bryce seized the opportunity and tackled Zach, injuring his knee and effectively ending his football career.

Afterward, Zach sought revenge by following Bryce to Navy Pier and beating him to a pulp. He left him conscious, but unable to walk. So when the press published reports that Bryce's cause of death was blunt force trauma, Zach assumed he was the killer. However, when he eventually went to the police to confess, Deputy Standall (aka Alex's dad) revealed that Bryce had actually drowned; what Zach didn't know is that he wasn't the last one to see Bryce that night.

After Zach left Bryce, Alex and Jessica showed up. Bryce had asked Jessica to meet him so he could give her a recording he'd made of him apologizing, but she understandably didn't want to go talk to her rapist alone on a dock in the middle of the night, so she brought Alex with her. When they arrived, an incapacitated Bryce begged them for help. His leg was broken and he couldn't walk, so Alex helped him up. But when Bryce started yelling that Jessica had set him up and he was going to destroy Zach's life, Alex snapped. "You've hurt everyone I've ever loved," he told Bryce, pushing him off the dock and into the water.

With his broken arm and leg, Bryce couldn't swim, so he drowned. There was a moment where he called out for Jess or Alex to help him, but honestly, if they had dived in, they probably would have died too. A flailing, injured, panicked, football-sized person would likely accidentally drag Jess or Alex down with him. And because neither of them came to his rescue, Bryce died. Technically Alex, having pushed him, is mostly responsible, but Jess is sort of an accessory, and Zach is the reason Bryce couldn't swim. In some way or another, they all had a hand in his death.

And yet, none of them were convicted for his murder. After Monty died in prison, Ani and her friends decided to cast the blame on him. Monty was dead, Bryce was dead, and no one else would have to go to jail, they reasoned. It worked, and the police shut the case. But Alex's father didn't seem to fully believe the Monty story. He was later seen burning clothes and evidence, seemingly in an attempt to protect his son.

For now, they've gotten away with it, but Season 4 could see the truth come to light— especially if Winston reveals that Monty was with him the night Bryce died. And whatever happens, Alex will still have to find a way to live with what he did. The case may be closed, but the ramifications of Bryce's death are far from over.