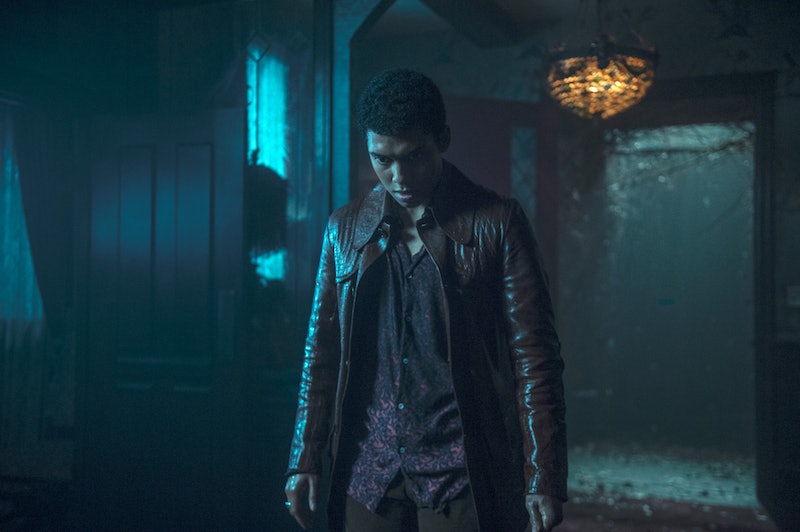 Spoilers ahead for The Chilling Adventures of Sabrina Part 2. He had only just arrived and then he was dead. Midway through the Chilling Adventures of Sabrina Part 2, Enoch the Anti-Pope is murdered. Ambrose is set up to take the fall, but as it turns out, he was nothing more than a puppet for Father Blackwood. We all know our Ambrose would never do something so cold-blooded.

Blackwood tried once before to stop Edward Spellman from delivering his doctrines for the Church of Night to Enoch. As revealed in CAOS Part 2, he seemingly caused the plane crash that killed Sabrina's parents while they were en route to present Edward's ideas to the Anti-Pope. But Sabrina found her father's manifesto at the bottom of the ocean and decided to take matters into her own hands.

Enoch was conveniently in Greendale to marry Zelda and Father Blackwood, so Sabrina seized that opportunity and gave Enoch the manifesto. Enoch promised to consider it alongside Blackwood's own more regressive, misogynistic manifesto, but Blackwood, of course, didn't want that. He'd already risked too much to keep the manifesto out of Enoch's hands, so he used Ambrose to kill Enoch for him.

Before the murder, Blackwood had already laid the seeds to be able to control Ambrose. When he freed Ambrose from house arrest, he gave him a familiar — Leviathan the mouse. But everything with Blackwood is shady, and Ambrose should have known better than to trust the gift.

As the re-animated corpse of Leviathan confirmed in Episode 7, Blackwood instructed Leviathan to crawl inside Ambrose and do Blackwood's bidding. In this case, killing Enoch the Anti-Pope. Ambrose had no say in the matter. After finding himself covered in Enoch's blood and standing by his body, Ambrose said he couldn't remember anything about the preceding moments. He'd merely been a puppet for Leviathan and ultimately Father Blackwood.

Blackwood put up a good show of acting shocked and upset. He ordered Ambrose to be killed for his supposed treasonous behavior. But then Blackwood had his wedding following Enoch's funeral, and it all seemed a little too staged. How convenient that Blackwood also ended up as the interim Anti-Pope in Enoch's stead.

His scheme wasn't unveiled to the council in Episode 7, but Sabrina was at least able to stop Ambrose's execution. She summoned the Dark Lord (or a projection of the Dark Lord?), who told Blackwood that he was tired of the pettiness. The image of the Dark Lord then commanded that Ambrose be pardoned, and the Witches Council obliged. He also ordered Blackwood to step down as Anti-Pope. Oh, if only everyone knew what Blackwood had done to get that interim job in the first place.

Father Blackwood may have evaded being outed as Enoch's real killer, but he probably won't succeed in stopping Edward Spellman's manifesto from getting out there. Sabrina decided to spread her father's gospel herself, and it's only a matter of time before the coven sees it's much more sensible than Blackwood's sexist, antiquated ideals. Blackwood may have killed the Anti-Pope, but he has not quashed Sabrina's desire to avenge her father or keep his legacy alive.