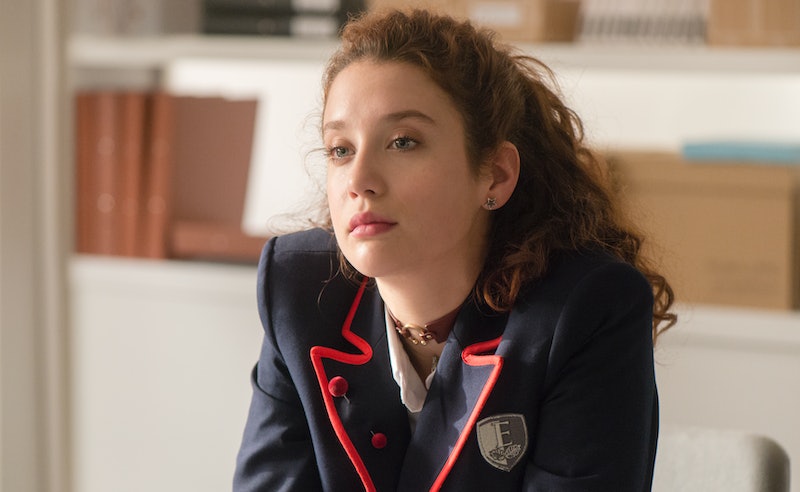 Major ahead spoilers for Elite's first season. The entirety of Elite Season 1 was spent answering one question: who killed Marina? But while who it was is rather simple — Polo — the reason why he did it is much more complicated. There were a lot of twists, love triangles, and betrayals that led to that major finale reveal — and there will be a lot of fallout left to come when Elite returns to Netflix Sept. 6. Which is why it's important to brush up on the details: they could end up coming back into play in Season 2.

As fans will recall, Marina (María Pedraza) was a student at Las Encinas, and the younger sister of Guzmán's (Miguel Bernardeau). Though she was among the rich, popular elite who dominate the school, she was also the only person who was nice to Samuel (Itzan Escamilla), one of the scholarship students transferred there after his school was destroyed, while everyone else was turning up their noses. He quickly developed a crush on Marina, and while he ended up losing his virginity to her, their romantic entanglement was far from simple. Thanks to series of dangerous choices involving Samuel's brother Nano, Marina ended up in the wrong place at the wrong time.

Having gotten out of prison just before the show picks up, Nano (Jaime Lorente) is a bit of a bad boy with a devil-may-care attitude polar opposite from his anxiety-riddled younger brother. Naturally, Marina was drawn in by his edgy charm and piercing eyes, and they began secretly hooking up. However, after Marina discovered that she was pregnant with Nano's baby, they decided to run away to Morocco together.

Enter Polo, who'd been dating Carla for half his life. Wanting to spice things up, Carla suggested he watch her have sex with Christian, another scholarship kid. The three eventually entered into a throuple, but the new dynamic put tension on their relationship, and Carla ended up leaving Polo for Christian — which is exactly what Guzmán had warned Polo would happen.

The Case of the Missing Watch

Remember the part where Nano had just gotten out of jail? Turns out, he owed some guys money for protecting him on the inside. The only problem was he didn't have it. Marina convinced him to rob Carla's dad (who was also her father's business partner), citing his impressive watch collection. One of them, however, turned out to contain a USB drive with some incriminating documents about the nature of their business. After Marina and Nano found out, they began blackmailing the two men for money in exchange for the watch.

As luck would have it, Marina ended up winning the coveted end-of-year trophy (beating out both Lu and Nadia), which would allow her to attend a school in Florida (and by extension, a chance to attend an Ivy League college). That same night, however, Polo confronted her in the pool area at Las Encinas to demand she give him Carla's dad's watch, hoping the gesture would win his estranged girlfriend back. The two got into a heated argument, causing a furious Polo to pick up her trophy and hit her fatally over the head.

Polo went crying to Carla, who was coincidentally having sex with Christian in the locker room. Ever the Olivia Pope, she cleaned her ex-boyfriend up and coached him on what he would say when the police questioned him. Sadly, Nano ended up being framed for Marina's murder, after discovering her body by the pool.

When Elite Season 2 picks up, Nano is still in prison, with Samuel swearing to get his brother out. Polo is still walking around Las Encinas as a murderer who got off scot-free, and both Christian and Carla know his dirty little secret. But knowing this show, it won't take long for their grand plan to start to unravel.