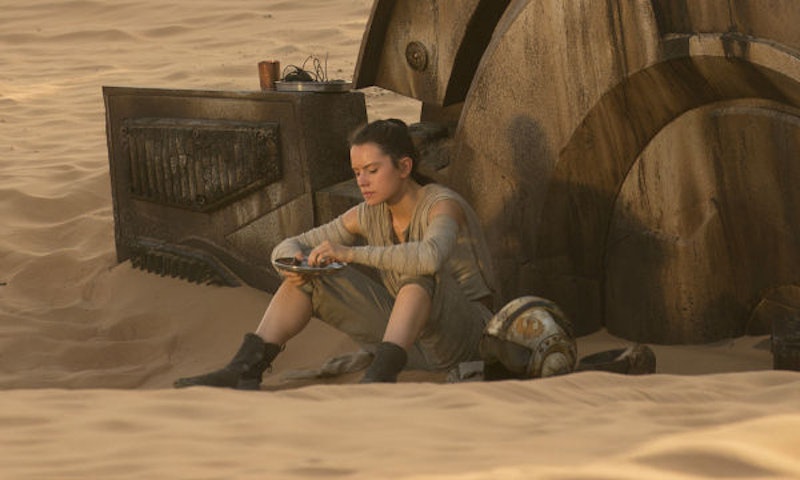 Star Wars: The Force Awakens opens by showing us how Rey's tough, lonely life on Jakku shaped her, but her journey really begins after she leaves the desert planet. While her story echoes Luke Skywalker's, Luke had family and discovered who he really was before leaving his home world. With all the off-planet action in The Force Awakens, it's almost easy to forget that someone left Rey there, and she clung to the belief they'd return for her for half the movie. But who left Rey on Jakku, and why would they leave a child on such a harsh, unforgiving planet?

It's only after meeting escaped Storm Trooper Finn and traveling elsewhere that Rey taps into her latent, extraordinarily strong Force powers. There are as many theories about her parentage and whee her powers come from bouncing around the internet as there are Ewoks on Endor, so let's dive in and examine some of the more thoughtful, outrageous, and interesting guesses. A number of these theories hinge on the idea that whoever left Rey to a harsh survivalist life did so knowing she couldn't, and wouldn't discover the Force on Jakku. So let's start there.

Rey's Parents Needed To Hide Her

Most of the other characters are severely confused why Rey is so determined to return to Jakku, a planet they're happy to escape or stay away from. So it's the perfect place to keep any casual outsiders from poking around to, say, accidentally find someone's hidden kid. This theory posits Rey's parents (or parent) left her there for her own safety following the second destruction of the Jedi at Kylo Ren's hand, and rise of the First Order. Parental possibilities include as-yet-unkown Force folk in hiding, Han and Leia, Obi-Wan Kenobi, Luke, and even Emperor Palpatine.

Han, Leia and Luke would have to be pretty cruel to not only strand their kid on a desert planet without family, but essentially sell her into subsistence labor at the hands of Unkar Plutt, trading parts for food. There's other arguments to be made for their case, but we'll get to that in a bit.

As for Obi-Wan, well... he's done this before with Luke, but even then Luke had family and Obi-Wan kept an eye nearby. True, there is a Church of The Force near Ren's trading post who might've kept watch, but then, they were also watching Rey struggle and starve...not exactly prime behavior for keepers of the Light Side of the Force. That's not even getting into the fact Obi-Wan would've broken a major rule of the Jedi Code by even having a kid. Love and relationships lead to attachment and jealousy, which in turn can lead to a Dark Side turn (which was the entire arc Anakin and Padme in Episodes I-III.)

Emperor Palpatine would make slightly more sense, as someone with that level of cruelty would have no problem leaving someone, even their own kid, stranded without a second thought. With the fall of The Empire, any fans of his work or enemies fearful of Palpatine II would want to stash his kid away. The timeline doesn't quite add up, as Palpatine was iced by his own apprentice in Episode VI, but hey, Jeff Goldblum just had a kid at 62.

She's Part Of The Skywalker Legacy

Rey is clearly strong in the Force, so it makes sense she'd come from a family that was too. The fan favorite is that she's Luke's daughter. Their origin stories on desert planets parallel, and it's Luke's lightsaber that sparks Rey's vision. Heck, the trailer (though not the movie) has Luke saying, "The Force is strong in my family. My father has it. I have it. My sister has it. You have that power, too." While we don't see who he's talking to, he's touching R2D2, who Rey also met in Episode VII. It's a pretty strong case. The Skywalkers' drama has taken up the majority of the Star Wars movies, so why stop now?

Han and Leia as her parents doesn't quite make sense. Sure, Kylo Ren seems to know who she is, but Han and Leia show slow, if any, recognition. Admittedly they do warm to her, and she and Leia hug in shared understanding following Han's death — possibly the unspoken familial/Force bond? But unless Kylo used some Jedi mind tricks to wipe everyone's memory, including his own, the rest of it doesn't really add up. This theory seems unlikely, though it might explain how the Millenium Falcon ended up on Jakku.

Rey Had Too Much Force Power & Was Put Away

This one's a twist on some of the previous theories. If Luke, random Rebel-aligned parents, or Han or Leia were aware their kid had some freaky-strong Force powers, they might fear she'd inadvertently harm those around her. Rey might have been put on a nearly empty planet not to hide her, but to protect everyone else from her. Luke was training the next generation of Jedi before his nephew Kylo Ren turned to the Dark Side, nearly destroying them all. If Luke knew someone else had even greater power, what's to say they wouldn't turn as well and completely wipe out the Jedi once and for all? Better to stick her in isolation to keep her from hurting others.

Rey Is An Incarnation Of Someone Else

This is one of the more outlandish theories, but when you look at the evidence it's actually pretty compelling. Rey is the incarnation of someone with extraordinary Force powers, either Obi-Wan or Anakin. We know both of them appeared as Force ghosts at the end of Episode III, but in Episode VII, Kylo says he can't communicate with his grandfather (Anakin). Maybe that's because after Kylo turned Dark Side, Anakin decided to reincarnate into the body of a young woman powerful enough to stop him. Variations on this theory have Anakin atoning for his evil through Rey's life. Their childhoods mirror each other, and both are preternaturally good pilots. The reason that lightsaber set her off wasn't because she's a blood Skywalker; it's because Luke's lightsaber was originally Anakin's before he became Darth Vader.

As for Obi-Wan, he specifically told Vader "if you strike me down, I will only become more powerful." Maybe he did so via reincarnation?

Rey Was Born Through Virgin Birth

Speaking of mirroring Anakin Skywalker, the Star Wars universe already had one virgin birth via midichlorians; why not two? If the Force could create the most powerful Jedi in the universe to defeat the rise of the Dark Side, there's no reason it couldn't do so again. The interesting thing about this concept is it has a Dark Side analogue, midichlorian manipulation. In Episode III, Palpatine told Anakin that Darth Plagueis was a master of it, and used the power "to create, maintain, or save life." So Rey might've been born for one purpose, but is finding her own path.

There are many more theories about who left Rey behind on Jakku. When we find out who, and why, it's probably going to be as big a reveal as Luke Skywalker's parentage, but until then, fans will clearly keep on guessing.