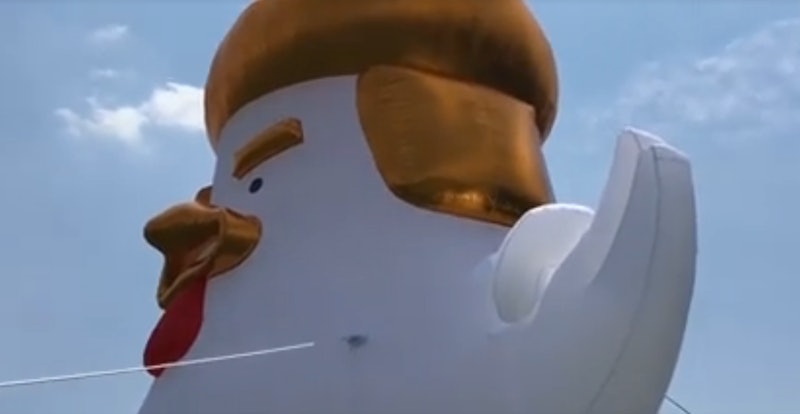 If you were on Twitter Wednesday afternoon, you likely saw that a chicken had crossed Pennsylvania Avenue and was flying high beside the White House. The sight made quite a spectacle and was retweeted like crazy. It was not any normal chicken, though, but rather Chicken Don, a 33-foot tall bird who looks an awful lot like President Donald Trump. As you may have guessed, that was no coincidence. Here's what that Trump chicken was all about.

The balloon was originally commissioned for the April 15 Tax Day marches, but is based on Chinese roosters floated in Lunar New Year celebrations. "Chicken Trump" Tax March Organizers explained that Chicken Don implies Trump is a chicken for not releasing his tax returns. "You got the serious logical issue of the tax returns, then you got brilliant mockery of him," organizer Taran Singh Brar explained to NBC News back in April.

Now, though, according to the GoFundMe page, Singh Brar sees the president as a chicken for lots of other reasons. The page description reads:

We think the coward squawking in the White House is too chicken to show his tax returns, too chicken to stand up to Putin, and too chicken to face the press. We've been inflating Chicken Don in his backyard so he knows no one is scared but him.

The chicken balloon's appearance on camera is more of a publicity stunt rather than the main protest. On Chicken Don's Facebook page, there is an event, the Chicken March, planned for Sep. 2. It will take place from 10 a.m. to 2 p.m. EST on the National Mall.

"Millions of people have marched on Washington for various causes, like the Million Man March and Women's March," the event page reads. "Now dozens of Chicken Don's will take the stage with inflatable tanks and armies of clucking chickens."

But the upcoming event didn't keep Brar from commenting on the news of the day. "We're here to criticize the president as a weak and ineffective leader," Singh Brar told ABC News Wednesday. "He's too afraid to release his tax returns, too afraid to stand up to Vladimir Putin, and now he's playing chicken with North Korea."

ABC also reported that Sing Brar had gotten special permission from the Secret Service to inflate the balloon so close to the White House. The chicken was actually between Constitution Avenue and the White House South Lawn; due to the angle it looked like he was flying next to the building, but that was just an illusion.