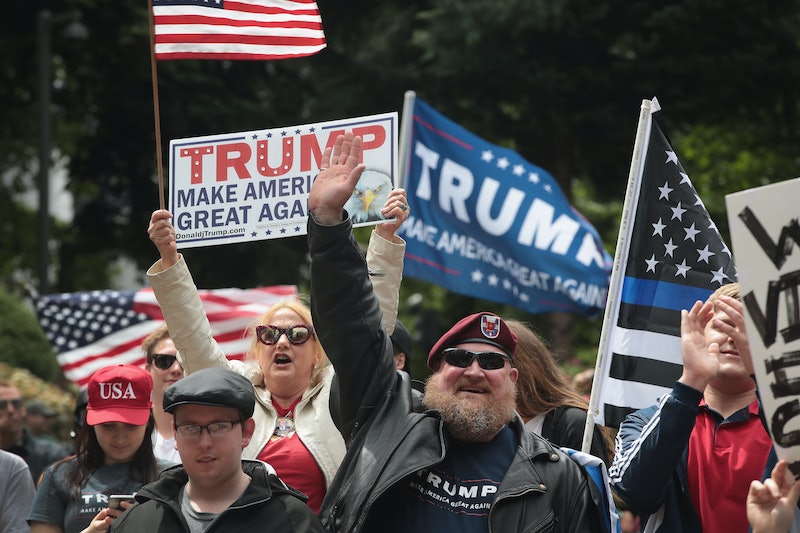 On Saturday, a nationalist, pro-Trump rally will compete with the Juggalos — fans of the rap-rock group Insane Clown Posse — and 30 other events to capture the attention of Washington, D.C. The pro-Trump rally, dubbed the "Mother of all Rallies," or MOAR, by its organizers, described itself on its website as the "Woodstock of American rallies." But who actually organized the Mother of All Rallies? One of the event's head organizers goes by Tommy Gunn — or "Pissed off American," as he is reportedly known on social media.

According to CBS, Gunn wanted to create a "huge" event for Donald Trump supporters. Two years ago, shortly after Trump announced his candidacy in the presidential election, Gunn said that the "silent majority has been awakened." Gunn was vocal in his support, and believed that the United States had been "forever changed" by Trump's campaign. Fast-forward to this weekend: Gunn has gone from supporting Trump's candidacy to defending his administration.

MOAR organizers have issued a mission statement calling not only for "protection for traditional American culture," but also for the promotion of the Trump administration's "America First" agenda. In a video advertising MOAR, Gunn insisted that this was actually "not a Donald Trump rally." He also echoed MOAR's mission statement, which invites "patriots of all colors" to attend. But Gunn and his fellow MOAR organizers have all donned Trump campaign gear and spoken out in Trump's favor, which makes MOAR's claims that this will be a nonpartisan rally seem rather insincere.

Moreover, the Facebook event page for Saturday's rally clearly states that it is taking place "in support of American values, American culture, American traditions, and of course President Donald Trump." Gunn even posted a "Trump 2020" T-shirt to his public Facebook page. The event page also reveals that roughly 2,000 people are slated to participate in the rally and that another 6,000 are interested in going.

Although Gunn is the founder of MOAR and the head organizer of Saturday's rally, he is also joined by a variety of other individuals and organizations. Among them are Andy "The Gun Guy" Hallinan — the owner of Florida Gun Supply — and Tammy "NeverHillary" Lee, the New York director of American Freedom Keepers and thus far the only individual woman affiliated with MOAR leadership.

In light of the white supremacist rally in Charlottesville, Virginia, that resulted in the death of counter-protester Heather Heyer, MOAR has prompted significant concerns. However, the event indirectly tried to distance itself from Charlottesville and the ongoing debate about Confederate monuments by prohibiting Confederate flags — and, in fact, all flags except the American one — from Saturday's rally.

“Due to increasing political and social unrest, many believe that core American values, customs and traditions are being sacrificed,” the MOAR website states. “Rally participants will demand protection for traditional American culture while they express their love for the United States and the America First agenda.”

Although MOAR is attempting to unite "patriots," thousands of other people are also projected to be at the National Mall that day. One group, in particular, will protest a 2011 FBI designation of Juggalos as a gang. Their approach to Saturday's events will be quite different from that of MOAR organizers. Jason Webber, a Juggalos march organizer, told The Washington Post that his group is not only apolitical, but also has songs that condemn racism and bigotry.

“We are all there to get the point across that we are speaking out against this foolish notion that Juggalos are a gang,” Weber told the Post. “We plan on staying within our march route and we could really not give a damn what the other groups on the National Mall are doing that day. As Patrick Swayze said in Dirty Dancing, ‘This is my dance space. This is your dance space.’”

Other events that are expected to take place in D.C. this weekend include weddings, charity events, a half-marathon, and the March to Protect American Democracy, which will focus on reported Russian interference during the American presidential election.