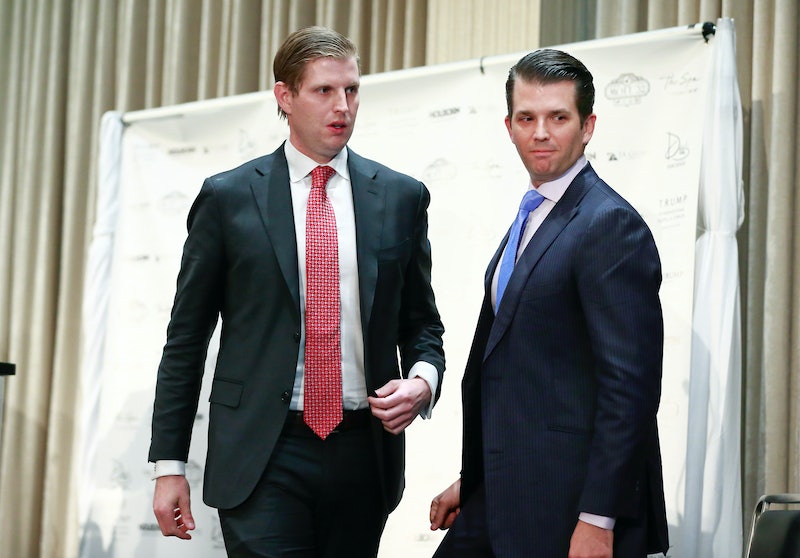 President Trump's two oldest sons treated a pub full of locals to a pint last week during their swing through a village where the family owns a golf course. But reports in Irish media on Friday noted that the bill wasn't settled up before they walked out, raising the question of who paid for Eric and Donald Trump Jr.'s bar tab.

Within a day, according to Newsweek, the owners of the pub — one of whom had told The Irish Mirror that the payment would be worked out later, as she assumed the brothers don't carry cash — said on social media they had been misquoted. The bar tab was eventually paid by the Trumps' golf course, according to Newsweek. Bustle has reached out to the Trump Organization for comment.

The Irish Mirror piece was largely positive about the Trumps' visit to Doonbeg, a small town in County Clare in the west of Ireland. It reported that the brothers visited Igoe Inn Bar & Restaurant, where, after offering to buy the whole bar a round of drinks, the brothers even went behind the bar and poured them for the locals, as video of the moment shows.

The paper quoted one of Igoe's owners, Caroline Kennedy, about the payment. "We’ll get the money later we were told there’d be no fear of it," Kennedy told The Irish Mirror. "I don’t think we've to worry about getting paid for that. I don’t think they carry cash. We were told it’d be all sorted later so there's no problem. We have the world press in our village and we are being zoomed in around the world and you couldn’t buy that publicity."

Then, according to Newsweek, the owners posted their own clarification to their Facebook page, which has since been taken down.

"I would like to clarify that The Igoe Inn was paid in full for the round of drinks that Eric & Don bought for our customers. We appreciate their business," the post read, as quoted by Newsweek, adding: "We Do Not appreciate being misquoted."

In a separate interview, the same owner told Entertainment.ie, an Irish entertainment news site, that the bill was paid quickly. "I was misquoted, again and again, and again. We were paid, and we were paid within the hour," Kennedy told the site. "I think people just wanted to jump on the bandwagon."

Newsweek noted that the Trumps are popular in that particular part of Ireland, because the golf course in Doonbeg provides jobs in the region. The president visited his own club — at a cost to the public of $3.6 million, according to HuffPost— while he was in Ireland last week for an official visit.

The president also went golfing at the property. The club tweeted pictures of that outing, which, according to Yahoo News, goes against a pledge made by the Trump Organization to not use Trump's role as president to advertise its properties. Those tweets were later deleted.

That didn't draw nearly as much international outrage as the presidents' sons' bar tab did, though. Many Twitter users were aghast at the idea of walking out of the bar without paying first — even if the bar owner herself was never worried that they'd settle up with her.