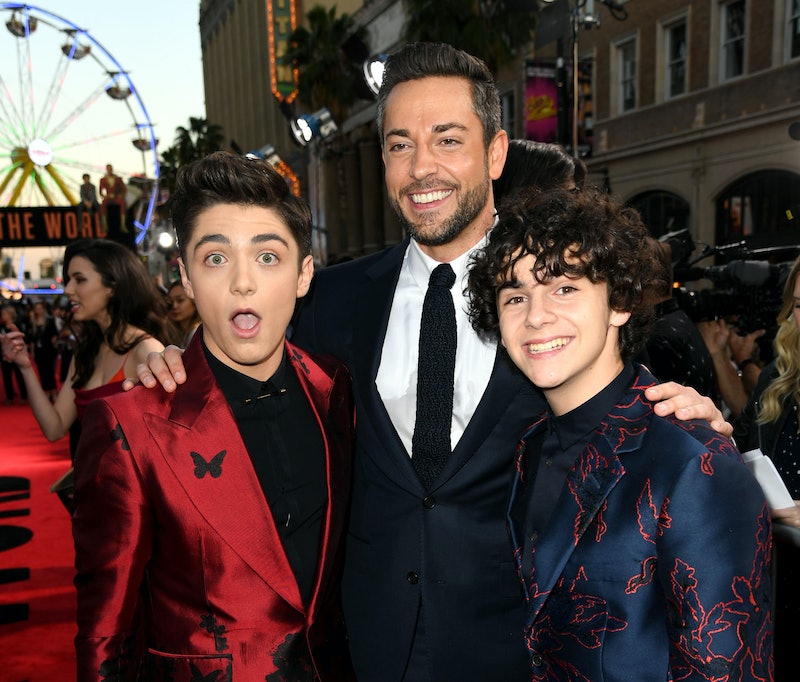 The DC Extended Universe gets what's basically the superhero version of Tom Hanks's Big with Shazam!, out in theaters now. In Shazam! — yes the exclamation point is necessary — 14 year-old Billy Batson gets transformed into a grown-up superhero called Shazam (Zachary Levi) after an unexpected run in with an ancient wizard. As an orphan, Billy spends a lot of his life being passed around from foster home to home, and the young Billy in Shazam!, played by Asher Angel, definitely pulls at your heartstrings.

Despite the fact that Angel's scenes are among the most serious of Shazam!, the 16 year-old still adds a lot of humor to the overall lighthearted film. In a scene from the film that's in the trailer, Angel's Billy meets The Wizard Shazam (Djimon Hounsou) and starts cracking up after the wizard gives a theatrical monologue about magic. In that moment you get a sense of Angel's boyish charm and comedic chops which you might recognize from the Disney Channel show Andi Mack, on which Asher Angel plays the titular character's boyfriend.

Whether you see already know the 16-year-old actor from Andi Mack or if you're just getting your first glimpses of him in Shazam!, he should be on your list of teen stars to watch out for in the coming years.

Not only does Angel star on a hit Disney Channel show and now the new DC film, but he also released two singles in 2018. The pop songs are called "Chemistry" and "Getaway," and in the music video for "Chemistry," Angel makes his way through a fancy party and makes some moves on a girl who's dressed in some '20s fashion. The music video — and theme — for "Getaway" has a much less glamorous sheen than "Chemistry," as it shows Angel and his friends, including Andi Mack star Peyton Elizabeth Lee embarking on a road trip.

Angel seems well on his way to becoming the next Nick Jonas, and he recently told Tiger Beat that he feels ready to take on life's challenges, That's how he relates to his Shazam! character too. "Billy’s had a hard life. He’s been out there in the world alone, and he’s basically fearless. That’s what I have in common with Billy surprisingly. He’s not afraid of anything," Angel told the teen mag.

Angel also told Tiger Beat that, in preparing for his role as Billy, he spent a lot of time with the Levi. "We really tried to connect with one another, and with the character to make sure it worked, but we only had one week to work together and make sure that our facial expressions and mannerisms were similar," he said. Levi also talked about sharing the role of Billy with Angel while talking to Collider and other journalists earlier this year. "We got as much [time] as we possibly could," the actor said, of getting to hang out with Angel and their other co-star, Jack Dylan Grazer, who plays Billy's foster brother, Freddy.

It seems like the three stars had a chance to bond before making the film based on Angel's Instagram posts with his co-stars. On one post that Angel posted of himself, Levi, and Grazer, he captioned the photo, "Real friends having Real fun doing Reel things."

Levi attested to having fun with Angel while preparing for sharing the role of Billy/Shazam. Per Collider, the Chuck actor said, "He’s just a really good, cool kid who also really loves life and video games and sings and dances and things I can relate to." The teen told Tiger Beat that if he had to choose one superhero power, it'd be the ability to fly. And considering that Levi has given Angel his seal of approval, the young actor's star will only be rising from here.