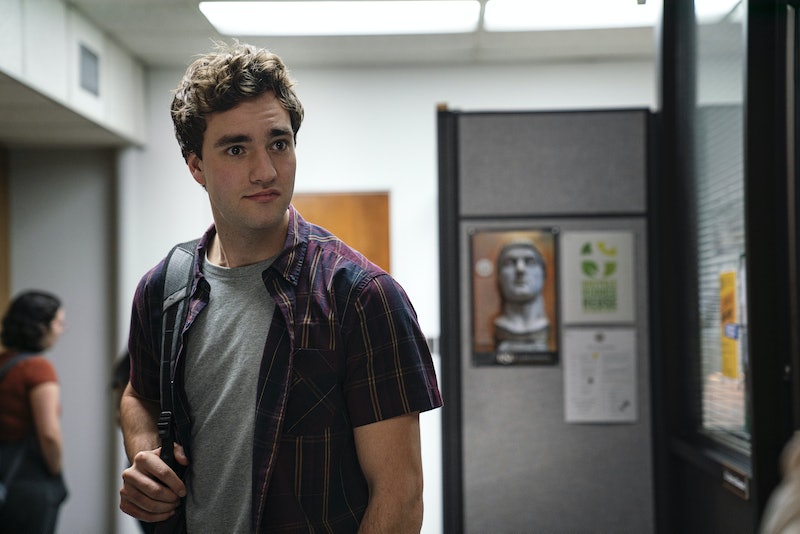 Though Mrs. Fletcher is largely about its titular character's journey to rediscover herself, it regularly checks in with her son Brendan, played by Jackson White. It's his leaving for college that spurs his mother's sexual re-exploration; now with an empty home, she finds herself having increasingly vivid fantasies — and wanting to act on them. But according to White, Brendan will be getting a sexual education of his own.

For Brendan, college is a rude awakening. "In high school, everyone liked me," he says in the Mrs. Fletcher trailer. "Now I'm the bad guy. I don't know how that happened."

But while White may play a "bad guy" in Mrs. Fletcher, his real-life mother — Married... With Children and Sons of Anarchy star Katey Sagal — is more than happy to sing his praises. "Proud mama," she captioned an Instagram post announcing his upcoming role in music industry coming-of-age drama The Space Between, in which he plays a wannabe record exec alongside Kelsey Grammer's washed up rock star.

Still, given Mrs. Fletcher's explicit nature, Sagal told The Talk she's prepared to "close her eyes at certain spots" while watching her son in his biggest project yet.

For White, nabbing a role opposite Kathryn Hahn in a high-profile HBO comedy is huge. He's previously had only a handful of parts, appearing in the 2017 teen rom-com SPF-18 as well as ABC sitcom The Middle and CBS action series SEAL Team. With The Space Between — which is being directed by Dallas Buyers Club producer Rachel Winter — on the horizon, this could be his breakout year.

More like this
Armani Jackson Is Following In His Famous Actor Sister’s Footsteps
By Catharina Cheung
'The Catch' Revisits A Famed Irish Filming Spot From 'The Tudors'
By Darshita Goyal
The Black Lotus Staff Has "Had Enough" In The 'White Lotus' Spoof From 'SNL'
By Brad Witter
At 28, Rosie Perez Risked Her Career To Stop Playing Stereotypes
By Gabrielle Bondi
Get Even More From Bustle — Sign Up For The Newsletter
From hair trends to relationship advice, our daily newsletter has everything you need to sound like a person who’s on TikTok, even if you aren’t.