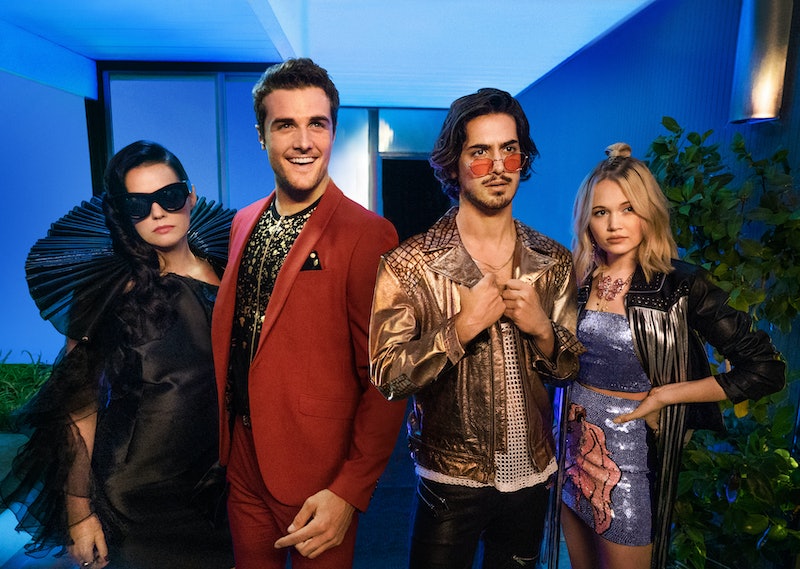 Now Apocalypse is the latest premium-cable series about the intersections of love and sex in a major city, but unlike Sex And The City, Looking, or Queer As Folk, there's an apocalyptic dread coursing through the new Starz series. However, some of the show's characters have bigger problems than uncovering a massive conspiracy. Carly, for instance, seems mostly interested in trying to secure her next acting gig and building a base of viewers for her cam shows. The actress who plays Carly on Now Apocalypse has been on television since 2006, but it's safe to say that her character in this sexually open series is a massive change of pace from the roles that she's known for.

Carly is played by Kelli Burgland and serves as sort of a second-lead to the series. When the series' main character, Ulysses, isn't busy trying to determine if his paranoid thoughts are indicators of a real conspiracy or just a marijuana-inspired delusion, he's seen debating different sexual philosophies and mourning the difficulties of city life with Carly. Burgland is a more successful actress than the character she plays in Now Apocalypse, but that's because she's been working steadily for over a decade, primarily in children's entertainment.

Kelli Berglund's most prominent role in film or television prior to Now Apocalypse was the character of Bree Davenport on the Disney XD Series Lab Rats, an ironic coincidence considering that the conspiracy lying under the surface of Now Apocalypse may reveal that Carly's entire group of friends are lab rats of their own. Lab Rats was a sitcom that focused on a group of teenagers with bionic superpowers over the course of four seasons and 89 episodes. While the science-fiction adjacent plot of Lab Rats may have prepared Berglund in some way for Now Apocalypse, there's no mistaking the content of the Starz series for anything resembling a Disney sitcom.

While speaking with some of the show's cast and crew on a panel for the Build Series, Berglund explained that doing Now Apocalypse "was kind of a big step" in her career. "I knew it would be a challenge for me as an actor and for me personally but I was so excited about it, and then actually getting onto set was nothing but so much fun, and that's because of this whole vibe that Gregg [Araki, writer and creator] sets with the crew, with the cast, everyone's on the same page."

As for her fans from her Lab Rats days, she says that "the people that were watching Lab Rats when they were 16 are now 20, 21. Hopefully, they'll like the show, take an interest in it," but Araki quickly pointed out afterwards that if anyone was 8 when Lab Rats was on the air, they probably aren't ready for what Now Apocalypse is bringing to the table. While Now Apocalypse is a big jump from her previous acting gigs, Berglund isn't shy in pointing out in for Build that this is her favorite role she's ever approached. It looks like fans of hers should get used to the actress leaving her Disney days behind her and taking on more challenging roles in her career.