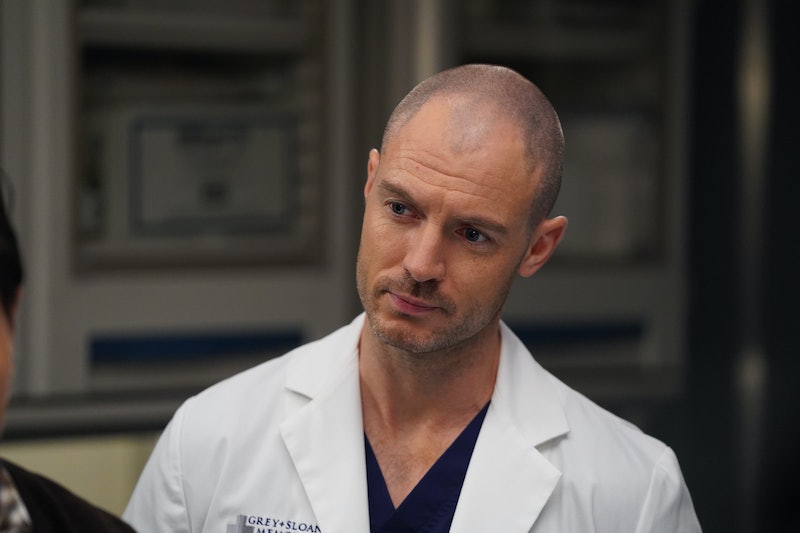 While some friends may send each other a bottle of wine every now and then, Cristina Yang sent her BFF Meredith Grey something much more vital: a hunky Irish surgeon by the name of Dr. Cormac Hayes, who is played by Richard Flood on Grey’s Anatomy. However, fans know him mostly as “McWidow,” a term Cristina used herself, who felt he was just what her “person” needed at this point in her life. But who is this guy, both on and off the screen?

Flood’s character serves as Grey Sloan Memorial’s new head of pediatric surgery, a position that was formerly held by Dr. Alex Karev before he was fired by Miranda Bailey. The funny part was that initially Hayes and Meredith didn’t get along at all throughout most of the episode. It wasn’t until the very end that she began to see the human being hiding underneath all of that arrogance, revealing that he was a widowed father to two teenage boys (hence the nickname “McWidow”). That information alone was enough to soften Meredith’s snap judgment of him, hinting that while it may not have been love at first sight, there definitely may be a spark.

But while McWidow may remain a bit of a question mark on the series, the actor himself may look very familiar to fans, having appeared in one very popular series in the past. According to his IMDb page, Flood portrayed Ford Kellogg on Shameless from 2017 through 2019. He appeared in a total of 14 episodes, which is fairly significant and could be where most viewers will recognize him from. Prior to that, Flood joined the cast of Crossing Lines in 2013, playing Detective Tommy McConnel. Then, in 2015, he nabbed a role in an Irish police drama series, Red Rock, where he played the police superintendent James McKay.

Apart from that, there isn’t a ton of acting credits to his name, but that could all be about to change now that he’s entered Grey Anatomy’s orbit. And from what showrunner Krista Vernoff has teased about his character thus far, he'll definitely shake things up between Meredith and DeLuca.

"It feels like the perfect character for Meredith to ask herself the questions that many of us and many fans have been asking since "MerLuca" became a thing," Vernoff recently teased to TV Guide at the Television Critics Association winter press tour. "Could this man ultimately be enough for Meredith? Is he enough of a grown-up, is he enough of an equal? You need someone to come in and play the role of 'grown-up equal' to ask that and answer that question."

So depending upon where things lead, McWidow could be sticking around for quite some time. Now that's something we can all be thankful for.

More like this
Shonda Rhimes Responded To The Surprise Exit Of A Day 1 'Grey's Anatomy' Figure
By Grace Wehniainen
Everything To Know About 'And Just Like That...' Season 2
By Jack Irvin and Grace Wehniainen
These Brooke Davis Quotes From 'One Tree Hill' Will Never Get Old
By Sabienna Bowman and Jack Irvin
These Clues Suggest 'Velma' Season 2 May Be On The Way
By Grace Wehniainen
Get Even More From Bustle — Sign Up For The Newsletter
From hair trends to relationship advice, our daily newsletter has everything you need to sound like a person who’s on TikTok, even if you aren’t.